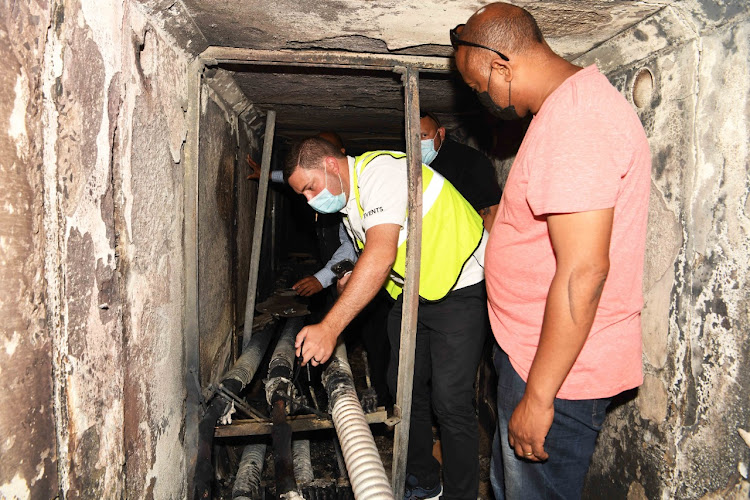 Cape Town mayor Geordin Hill-Lewis inspects some of the damage caused to power cables. Power was restored to all parts of the city on Tuesday evening.
Image: City of Cape Town

The City of Cape Town said power was restored to all areas on Tuesday afternoon after a huge outage on Monday.

Parts of Cape Town were plunged into darkness after a “technical fault” on the grid. Area 7, which includes Green Point, Sea Point, Camps Bay and Clifton, was affected.

On Tuesday morning, the city said its electricity generation and distribution department worked throughout the night to restore power using different supply routes.

“I’m really pleased that the majority of the affected areas has now been reconnected, and our officials have confirmed that areas not yet online will be reconnected by 4.30pm today,” Cape Town mayor Geordin Hill-Lewis said earlier on Tuesday.

Cape Town plunged into darkness due to 'technical fault'

Parts of Cape Town were plunged into darkness on Monday evening after a "technical fault" on the grid, the city said.
News
6 months ago

Hill-Lewis thanked the residents of Cape Town for their patience.

“The initial focus was on restoring supply to vulnerable areas including hospitals, clinics and medical storage facilities.

“Once we had secured these , our staff turned their attention to the rest of the affected areas and had many back online by midday,” Hill-Lewis said.

He said the cause of the outage was identified as major cable damage to City and Eskom feeders in conjunction with the loss of a conductor on the Eskom overhead line.

He said the cable damage resulted in the tripping of all cables feeding Area 7.

He said repairs to the damaged cables will take up to five weeks.