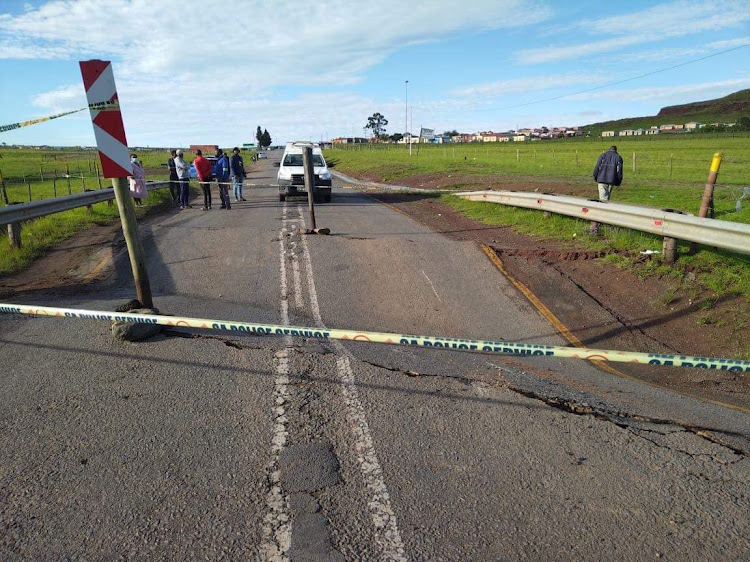 Heavy rains in the Eastern Cape have led to the collapse of a section of the R61 at Tsomo junction between Ngcobo (formerly Engcobo) and Cofimvaba village in the Chris Hani district municipality.

The road has been closed.

According to the provincial transport department, the area which has collapsed is above a culvert structure that channels water under a bridge on the road.

“The effect of persistent rains that have continued to soak the province for the past three weeks is taking its toll on roads,” the agency said.

The department said the SA National Roads Agency, custodians of the road, has been notified of the damage.

“Plans to fix it will be announced. The road has been cordoned off and officers are on the ground advising motorists on alternative routes.”

Motorists are advised to use alternative routes:

The transport department has apologised to motorists for the inconvenience.

In Gauteng emergency teams had to evacuate families after heavy rains caused flooding in Johannesburg and Tshwane.

On Tuesday, at least 11 people from two households were evacuated after flash floods in Alexandra next to the Jukskei River in Johannesburg.

On Monday, several people were evacuated in Hammanskraal, Tshwane, after heavy rains continued through Christmas Day and Boxing Day.

Last month, the Johannesburg Roads Agency issued a warning about a structural road collapse on Kare and Fawcus Streets in Jeppestown. The agency said an investigation found there was severe damage to the storm water infrastructure and the collapse was the result of heavy rains.

The recent heavy rains wreaked havoc in some parts of the Eastern Cape with the latest damage discovered on the R61 in Tsomo, near Kwa-40 Village, ...
News
4 months ago