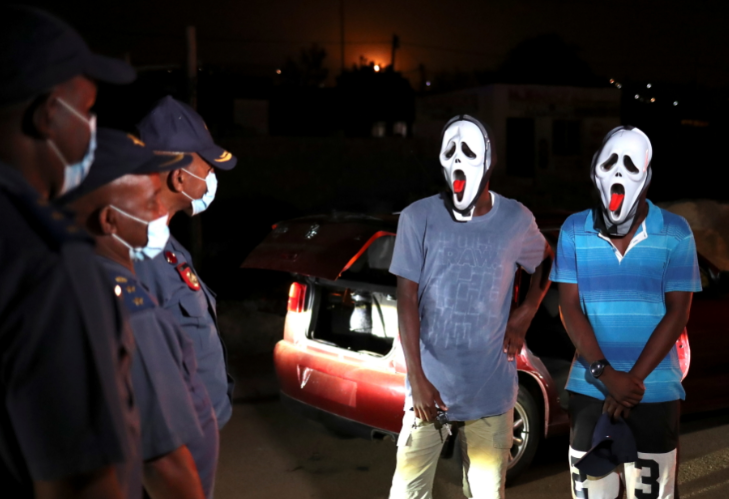 Police officers stop men wearing masks during a patrol as a nighttime curfew is reimposed amid a nationwide coronavirus disease lockdown, in Pretoria, South Africa, on January 9, 2021.
Image: REUTERS/Siphiwe Sibeko

SA could enter the new year under new Covid-19 regulations that will lift the midnight curfew and ease restrictions on gatherings.

TimesLIVE can reveal that the presidential co-ordinating council (PCC) meeting on Thursday recommended to cabinet to do away with some restrictions, but opted to keep the state of disaster despite a push against it by representatives from the DA.

The recommendation will be discussed by the cabinet before an announcement is made.

In November in his latest national address, President Cyril Ramaphosa said the country should remain on alert level 1 for now and that the national state of disaster should remain in place.

Police minister calls on South Africans to comply with the midnight curfew.
News
5 months ago

• There is a curfew in place from midnight until 4am.

• No more than 750 people may gather indoors and no more than 2,000 outdoors. Where the venue is too small to accommodate these numbers with appropriate social distancing, then no more than 50% of the capacity of the venue may be used.

• No more than 100 people are permitted at a funeral, and night vigils, after-funeral gatherings and “after-tears” gatherings are not allowed.

• The wearing of masks in public places is still mandatory, and failure to wear a mask when required remains a criminal offence.

• The sale of alcohol is permitted according to regular licence conditions, but it may not be sold during curfew hours.

However, there has been mounting pressure from opposition parties, mainly the DA, to end the curfew.

DA leader John Steenhuisen said in a statement on Monday that as shown by low hospitalisation rates across the country, the Omicron variant had proved to be far milder than past variants while vaccines had proven to be extremely effective.

“The real crisis now is the state of the economy and widespread suffering from loss of livelihoods. The DA has never supported the curfew, as we have never found it to be a rational or justifiable denial of freedom.

“But now more than ever, we believe it should be lifted once and for all, and before New Year’s Eve. Ending the curfew is an easy and logical way to boost the economy, particularly the restaurant and events industry, which are major employers and have taken huge strain and made immense sacrifices during the pandemic,” he said.

Minister in the presidency Mondli Gungubele refused to comment on the developments while Western Cape premier Alan Winde, whom TimesLIVE understands to have represented the DA in the meeting, was not available.

The PCC is chaired by Cyril Ramaphosa and composed of the deputy president, ministers, premiers of all provinces and the South African Local Government Association (Salga).