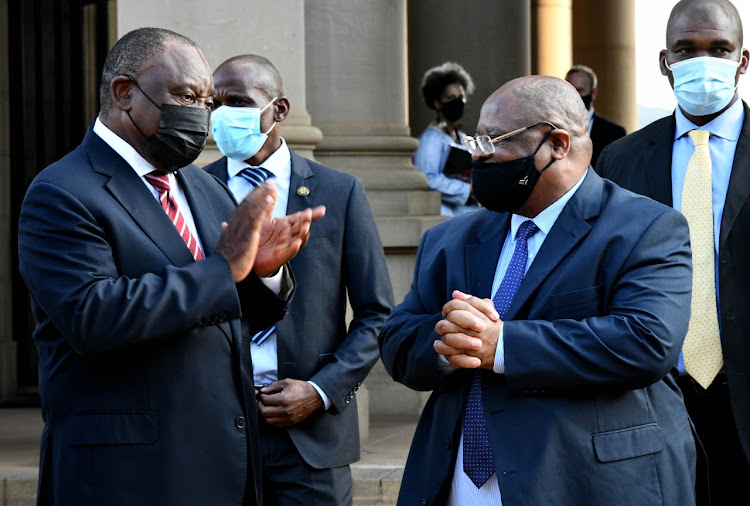 President Cyril Ramaphosa and acting chief justice Raymond Zondo outside the Union Buildings just before the latter handed over the first part of the state capture commission's report on Tuesday.
Image: GCIS

Engaging with the report will allow South Africans to “be part of the national effort to put state capture behind us and build an ethical, capable developmental state and a society governed by the values of our democratic Constitution and the rule of law”, said ANC spokesperson Pule Mabe.

The report, of more than 870 pages, was released publicly on Tuesday.

Mabe said the party welcomed the report, which it was yet to process in detail.

"The ultimate responsibility for leading the fight against corruption in public procurement cannot again be left to a government department or be ...
News
4 months ago

Following the report, the party’s highest decision making body, the national executive committee (NEC), will put in place mechanisms to process any parts of the document that pertain to the organisation, its deployees or members, according to Mabe.

The ANC said it would support the government as it considers the findings of the report and works to restore good governance “and decisively tackle all forms of corruption within the state and across society”.

The DA has also welcomed the report. It applauded the commission for making public the minutes of ANC cadre deployment committee meetings, a move which it termed a critical point in building a capable state.

“These records vindicate the DA’s decades-long battle against cadre deployment. They confirm that the ANC has completely usurped the power to appoint officials throughout our state,” said MP Leon Schreiber.

“The public release of these records signals a critical turning point in the DA’s historic battle to end cadre deployment and build a capable state where officials are appointed strictly on the basis of their ability to do the job.

“We will consider and announce next steps in the coming days,” Schreiber added.