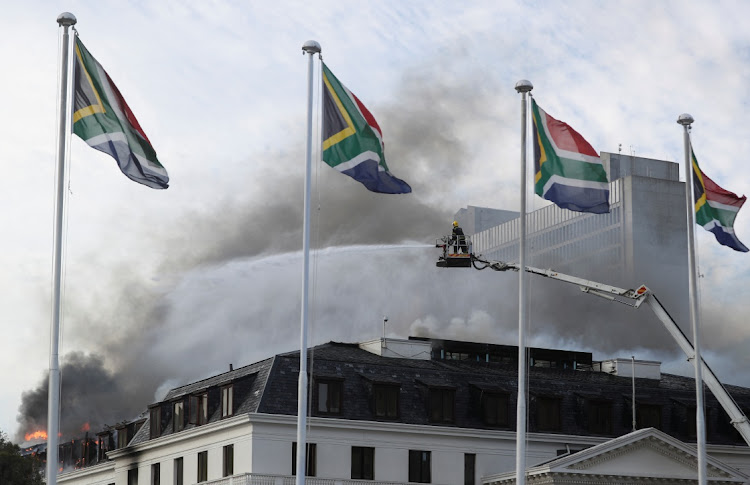 Firefighters at work at the national parliament in Cape Town after the fire flared up again.
Image: REUTERS/ MIKE HUTCHINGS

South Africa was left shocked on Monday after a fire at parliament in Cape Town reignited and spread.

Firefighters had largely contained the blaze, which broke out on Sunday morning, but strong winds reignited and fanned the fire late on Monday.

It threatened to spread to the official office of the president, Tuynhuys, after engulfing “the entire roof”.

JP Smith, the City of Cape Town mayoral committee member for safety and security, said the fourth and fifth floors of the new wing, above the National Assembly, were “completely gutted”.

“Wind taking flames close to palm trees in Company Gardens, 10m from Tuynhuys. Crews are dampening down vegetation separating both buildings. Heavy-duty, aerial firefighting appliances have just arrived, that can operate within the current strong winds,” he said.

The fire has since been contained.

The fire has gripped much of the nation's attention and reignited calls by the EFF to move parliament to Tshwane.

On social media, many shared their shock at the fire flaring up again and weighed in on security at the building.

As a patriotic South African this image of our National Assembly in ashes really break my heart. We really need to tighten our countries security. pic.twitter.com/JiMFPGY89o

They can finally move parliament to Pretoria now...

Dear Movie Producer's, I think South Africa is now ready for a real movies to compete internationally, something like Parliament Down or Manzi Unrest or The State Capture something along those lines 🤔 😀 😄 #ParliamentAttack pic.twitter.com/HXQDTjuaHU

Of course, the Parliament building should spark rage in all of us. I think that we should all be upset and sad but this is South Africa - many of us are too busy trying to not die from poverty and exclusions to even care - make no mistake though; we should care. It's ours.

Spaza shops are run better then our parliament https://t.co/HYc7qIP6lk

Is the Parliament building insured? If so, with reports of sprinklers and alarm systems not working, will any insurance company pay out? @GovernmentZA

Elected representatives can constitute parliament anywhere even under a tree or mud hut for that matter. Gees these people are beyond redemption. They can use a tent or even run things online as they have been doing during covid. Why obsession with apartheid relics???? https://t.co/T7f31L47yH

I don't think you guys would be as chirpy live. It's heartbreaking to see. I can't believe my eyes. pic.twitter.com/bD7mSGtDmR

I woke up and remembered that parliament is really a heap of ashes. It's not just a bad dream.

Between the July riots and this, do we realise what a low point in our Democracy this is?

They can't simply explain their way out of this. They are bad stewards of our democracy. 😔