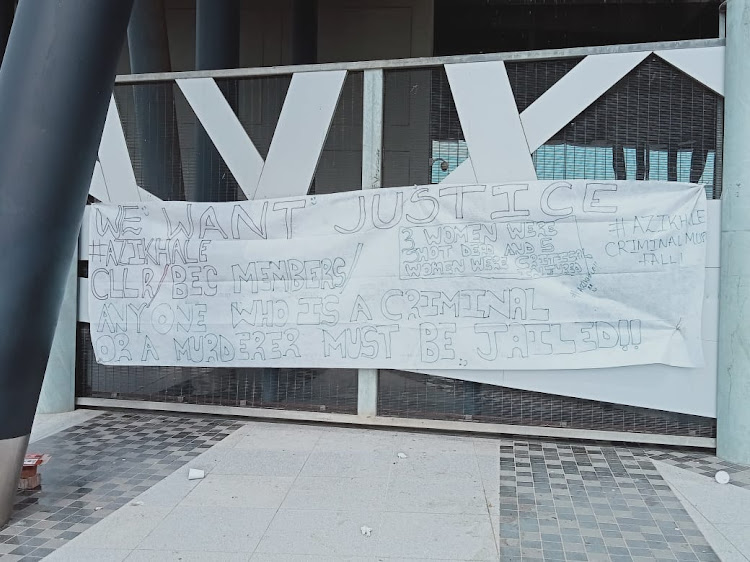 Comrades of three ANC members who were shot before an ANC meeting in Inanda, KwaZulu-Natal, display a poster at the Ntuzuma magistrate's court on Tuesday.
Image: Mfundo Mkhize

A gravely ill suspect  — one of four people charged with the Inanda drive-by shooting of three ANC members in September — was granted R3,000 bail in absentia in the Ntuzuma magistrate’s court on Wednesday.

The victims had been attending an ANC branch nomination meeting at Buhlebethu school when an Opel Corsa with four occupants pulled up and fired shots at them.

The nominated candidate was to represent the party and subsequently ward 54, an ANC stronghold, in the November elections.

Siyabonga Lundy, Sibongile Buthelezi, Samukelisiwe Maphumulo and Thembinkosi Mkhwanazi were arrested by members of the political task team in connection with the shooting that claimed the lives of Ncami Shange, 34, Beatrice Nzama, 60, and Philisiwe Jili, 37.

David Mabuza has admitted that the pace at which the ANC is addressing service delivery is slow, and that this led to despondency among voters.
Politics
4 months ago

In his written affidavit presented to court, Lundy cited his kidney failure as a medical condition for which he was unable to receive proper treatment while being detained.

The father of three said he was not at the scene when the shooting occurred on September 11.

Melusi Xulu, who is representing Lundy, Buthelezi and Maphumulo, urged magistrate Sicelo Zuma to take into account the constitutionality of the accused's bail pleas.

“My client’s absence from court is further proof that his situation is exceptional. In my instructions, my client repeatedly said that his health is better treated at home than in detention,” he said.

He said the country’s constitution placed a high premium on the spirit of ubuntu.

“We should not go back to the days of pre-1994 when detained suspects were subjected to inhumane conditions.”

The court appearance had to be briefly adjourned when angry protesters attempted to storm the court and chanted struggled songs. This was despite a heavy police presence. The protesters, some of whom sported ANC regalia, said they were against the accused receiving bail. 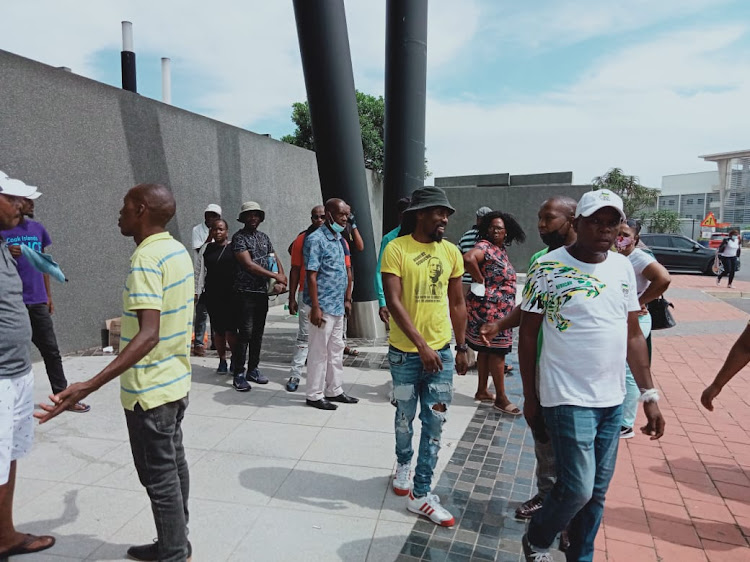 Friends and family of three women who were shot during a drive-by shooting at a crucial ANC meeting in Inanda protested outside court on Wednesday.
Image: Mfundo Mkhize

State prosecutor advocate Yuri Gangai told the court he was against the release of the four suspects. He said they had robbed the families of three women who were brutally killed and also caused five near-fatal injuries to people who had attended the meeting.

“The degree of violence is an important factor that needs to be considered.”

He said the accused had gathered in a clandestine meeting where a plot was discussed to disrupt the ANC candidate nomination meeting for the November election.

He said the meeting had brought together members of the ward 54 branch executive committee, who wanted their preferred candidate to be elected unopposed.

‘“The accused wanted to disregard the fair process of elections and have an advantage,’’ he charged.

Qoboshiyane also tipped to be in race for ANC provincial chair

While the fight for the Eastern Cape ANC provincial chair position initially seemed like a two-horse race between incumbent Oscar Mabuyane and ...
Politics
4 months ago

He said the overwhelming public interest the case had garnered also meant the public was against bail.

Gangai said the investigation was still in its infancy and there was a “strong likelihood” that others would be prosecuted.

He listed ballistic analysis on cartridges found and Section 205 subpoenas on cellphone records. “This should give us a clear indication as to who was talking to whom,’’ he said.

The case was adjourned until Thursday for a decision on bail for the three other accused.