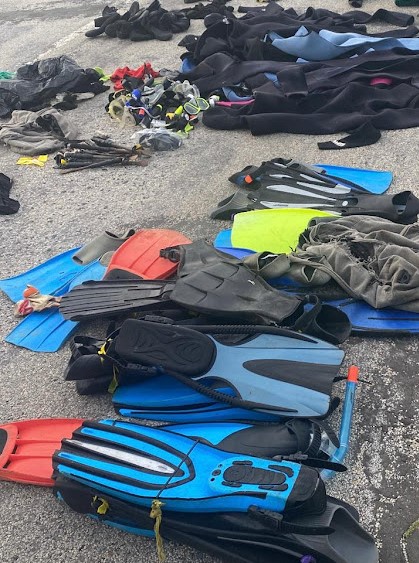 Some of the items seized by police on Wednesday.
Image: supplied

Two suspected perlemoen poachers were arrested at Sardinia Bay, in the Eastern Cape, on Wednesday after private security members found them with two vehicles containing diving equipment and cameras.

Police spokesperson Col Priscilla Naidu said the suspects, both aged 20, had been detained on a charge of unlawfully and intentionally conspiring with another person to commit an offence.

Naidu said two vehicles and “a lot” of diving equipment and cameras had been confiscated.

“An inquiry will be conducted in respect of the seizure of the diving apparel and equipment,” Naidu said.

The suspects are expected to appear in court soon.

Over the past two weeks, the anti-poaching unit has confiscated more than 30 sets of diving equipment and three vehicles have been impounded.

“This [Wednesday] morning a vehicle tried to evade our unit but was stopped.

“A drone was put in the air and 20 sets of diving equipment were found,” a member of the unit said.

Explosion leads to discovery of perlemoen

A massive gas explosion at a warehouse in Motherwell led to the discovery of perlemoen valued at more than R1m at the weekend.
News
2 months ago