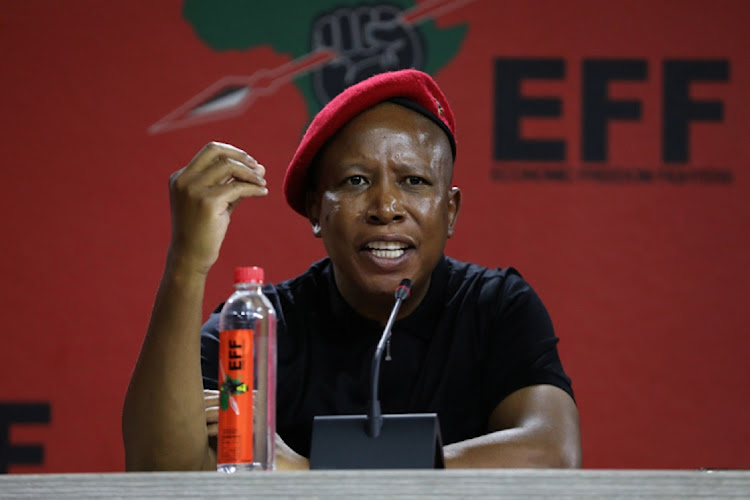 EFF supporters are going to stage a picket outside the office of sports minister Nathi Mthethwa in Pretoria next Thursday to demand the immediate reopening of stadiums for spectators.

EFF leader Julius Malema said if there is no progress on the matter after their picket, they will move to the offices of the Premier Soccer League (PSL) and the SA Football Association (Safa).

Malema on Saturday strongly called on the PSL to challenge regulations that have limited attendance at stadiums for professional sports to 2,000 as a precaution against Covid-19.

EFF leader Julius Malema on Wednesday refused to reveal how much it cost the party to build a three-bedroom home for recently deceased EFF member ...
Politics
5 months ago

On Wednesday the SA Sports Confederation and Olympic Committee (Sascoc) said it would recommend to the government that stadiums host vaccinated fans at half their capacities from next month.

“Next week Thursday we are picketing at the Department of Sport to demand that it must suggest to that council (the national coronavirus command council) that stadiums must be opened,” Malema said.

“Even if it is opened to limited numbers, we don’t care but stadiums must be opened. There is a picket that will go to the department of sports and if there are no results from that picket, we are going to picket at Safa and at the PSL.”

[MUST WATCH]: CIC @Julius_S_Malema says on Thursday next week, we are picketing at the Department of Sports, Arts and Culture to demand for it to suggest that the stadiums must be open. pic.twitter.com/qxlgYv0i1a

Malema also suggested there are elite business people or companies aligned to the ANC who are benefiting from fans not being allowed at stadiums. He took aim specifically at the PSL's headline sponsor of the Premiership and official broadcaster, DStv.

“It looks like there is a group of ANC-aligned elites who are enjoying this thing of people watching from DStv. It means more money and more viewership for DStv and those who don’t have DStv can’t enjoy the beauty of football in SA,” he said.

“The Afcon [2021 Africa Cup of Nations] is playing there in Cameroon at the moment and people are at the stadiums — what is the difference here in SA?

“Remember that when stadiums are open, informal traders make a lot of money to feed their families in this era of high unemployment.

“There are a lot of implications. We are demanding here and now that stadiums must be opened.”