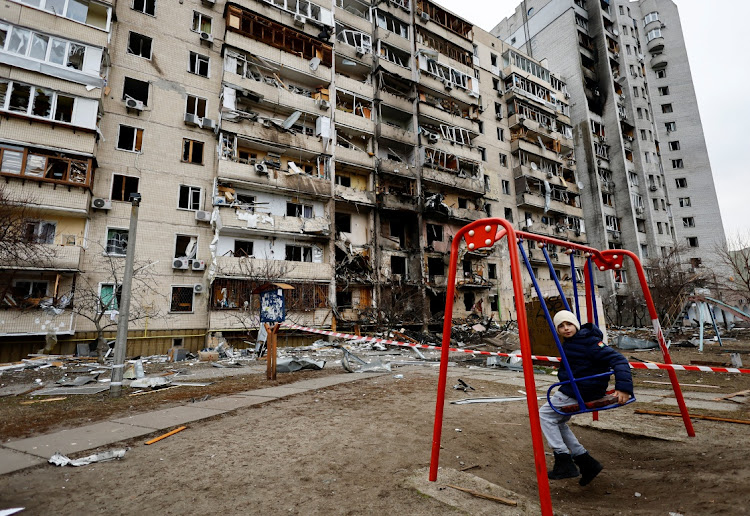 A child sits on a swing in front of a damaged block of flats in Kyiv after Russia launched a massive military operation against Ukraine.
Image: REUTERS/Umit Bektas

Russia’s foreign minister told a Geneva disarmament meeting on Tuesday that Ukraine has been seeking to acquire nuclear weapons, a “real danger” that needed a Russian response.

Russia invaded Ukraine last Thursday in what it called a special operation to demilitarise and “denazify” the country — a justification dismissed by Kyiv and the West as propaganda.

“Today the dangers that (Ukrainian President Volodymyr) Zelenskyy’s regime pose for neighbouring countries and international security in general have increased substantially after the authorities set up in Kyiv embarked on dangerous games related to plans to acquire their own nuclear weapons,” Russian foreign minister Sergei Lavrov told the Conference on Disarmament in a video address.

“Ukraine has Soviet nuclear technologies and the means of delivery of such weapons. We cannot fail to respond to this real danger,” he said, also calling for the US to rebase its nuclear weapons from Europe.

He delivered the speech to a thin crowd after many diplomats. including France and Britain, staged a walkout to protest against Russia’s invasion of Ukraine as they did at a parallel UN meeting in Geneva on Tuesday.

UK says Russia needs to withdraw from Ukraine for any talks

British foreign minister Liz Truss said on Sunday there could be no talks with Russia over Ukraine while Moscow has troops in its neighbour.
News
4 months ago

They stood in a circle outside the meeting for the duration of Lavrov’s speech while  holding a Ukrainian flag. Lavrov was supposed to attend the session in person but the visit was cancelled, with Russia accusing unidentified EU states of blocking his flight path.

Earlier, a minute of silence was held for the victims of fighting in Ukraine.

Russia’s invasion of Ukraine has enlivened the deadlocked arms negotiating forum that has failed to reach a deal in decades despite holding more than 1,600 plenary meetings.

At the same meeting, Ukraine’s foreign minister accused Russia of war crimes through its shelling of his country, and the ambassador called for a special meeting to address Russian aggression and weapons of mass destruction.

A copy of the request seen by Reuters said the meeting would address the “the use of conventional weapons against the civilian population as well as nuclear and other weapon of mass destruction threats” and called for concrete and specific actions.

It said the request was supported by “numerous other” members of the 65-member body  without naming them. Russia’s delegate objected to the proposed meeting.