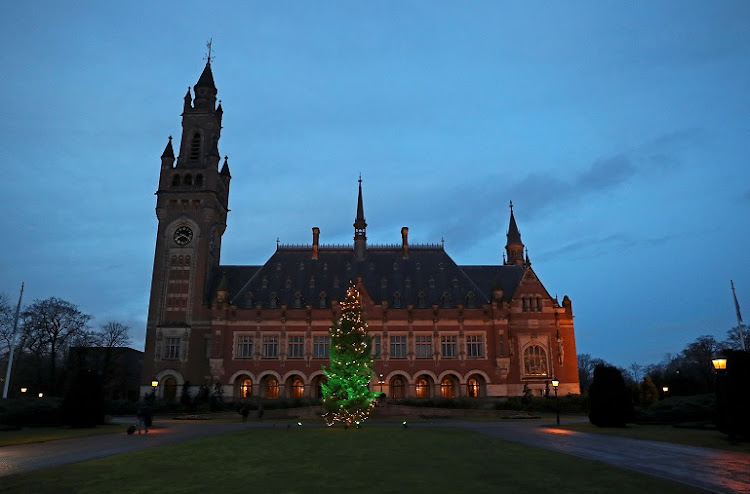 The International Court of Justice (ICJ) on Wednesday ordered Russia to cease military actions in Ukraine immediately, in a preliminary decision in a case brought by Kyiv.

"The Russian Federation shall immediately suspend the military operations that it commenced on February 24, 2022 on the territory of Ukraine," judges at the United Nations' highest court said in a 13-2 decision.

The judges added that Russia must also ensure that other forces under its control or supported by Moscow should not continue the military operation.

Although the court's rulings are binding, it has no direct means of enforcing them and in rare cases countries have ignored them in the past.

Ukraine filed its case shortly after Russia's invasion began on Feb. 24, saying that Russia's apparent justification, that it was acting to prevent a genocide in Eastern Ukraine, was unfounded.

At the hearings, Ukraine said there is no threat of genocide in Eastern Ukraine, and the United Nations' 1948 Genocide Convention, which both countries have signed, does not allow an invasion to prevent one.

MPs weighed in on SA’s response to the Ukrainian invasion by Russia which has affected the global community for close to a month.
News
3 months ago

Russian President Vladimir Putin has described the invasion as a "special military action" needed "to protect people who have been subjected to bullying and genocide" - meaning those whose first or only language is Russian - in eastern Ukraine.

Russia said it skipped World Court hearings on March 7 "in light of the apparent absurdity of the lawsuit".

However, Moscow did file a written document with the court saying the ICJ should not impose any measures.

Russia had argued that Putin's use of the word "genocide" does not automatically imply that it is basing its actions on the Genocide Convention. Without a dispute over the interpretation of the treaty, the court has no jurisdiction, Russia argued.

But Presiding judge Joan Donoghue said the court had enough information that the two countries do disagree about the interpretation of the Genocide Convention to make the preliminary decision. Actual jurisdiction would only be decided later.

Ukrainian President Volodymyr Zelenskyy on Wednesday urged the US Congress to provide more weapons to help his country fight off Russian airstrikes ...
News
3 months ago

In an urgent situation such as the conflict in Ukraine the court can order emergency measures in a matter of days, even before it decides on whether it has jurisdiction in a case. That usually takes many months, while decisions on the actual merits of a case takes years.

Meanwhile, The chief prosecutor of the International Criminal Court said on Wednesday he insisted on "zero tolerance" of sexual and gender-based crimes and crimes against children as fighting intensifies in Ukraine.

In a rare trip into a conflict zone by a top international prosecutor, Karim Khan said he had met with Ukraine's foreign minister and prosecutor general during a short visit before visiting Poland.

The ICC started a formal investigation into possible war crimes and crimes against humanity in Ukraine after Russia invaded its smaller neighbour on Feb. 24.Khan said the ICC would investigate all sides in the conflict.

"We must insist that there is zero tolerance for any crimes of sexual, gender-based violence or crimes against children and that is going to be increasingly important as urban warfare intensifies," Khan said during a briefing.

"No person with a gun, or a missile, or a plane, or a mortar has a licence to target civilians. Civilian objects and civilians must be protected. Prisoners of war must be treated humanely," he said.

Transport minister Fikile Mbalula had social media in a huff at the weekend when he, without any context, shared that he had “just landed in Ukraine”.
News
3 months ago

Neither Russia nor Ukraine is a member of the ICC and Moscow does not recognise the tribunal. But Ukraine has given it its approval to examine alleged atrocities on its territory dating back to Russia's annexation of the Crimea in 2014.Hundreds of civilians have been killed and more than three million people have been displaced in the past three weeks during what Moscow calls its "special military operation" in Ukraine.

Khan said earlier on social media that he and Zelenskiy agreed that "all efforts are needed to ensure international humanitarian law is respected and to protect the civilian population".

The ICC is a court of last resort to prosecute individuals for atrocities when a state is unwilling or unable to do so. Its founding treaty has been ratified by 123 countries.