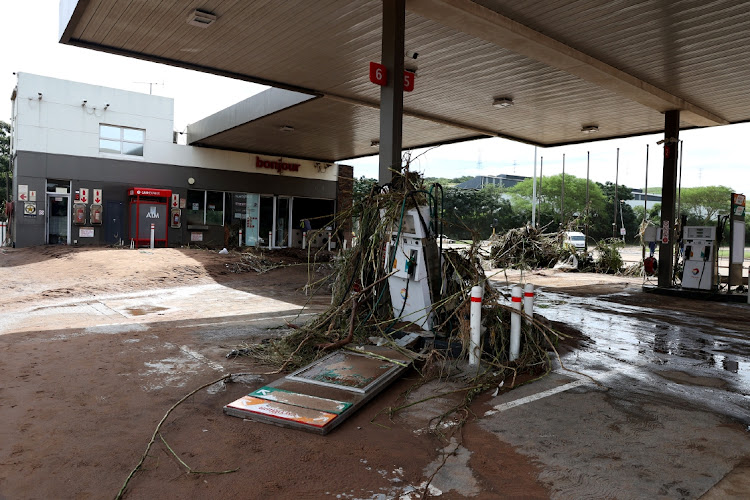 A fuel station on North Coast Road was flooded and a wall collapsed into the nearby river. Due to the extensive damage to infrastructure in the province, fuel could not be delivered to stations.
Image: Sandile Ndlovu

Motorists in KwaZulu-Natal were driving around looking for fuel on Friday morning after pumps ran dry over the past two days.

Many were turned away as several fuel stations did not have petrol or diesel while others were restricted to filling from R100 to R400 per customer.

The Fuel Retailers Association could not be reached for comment on Friday morning, but TimesLive has seen communication sent from suppliers to fuel stations.

One said due to the severe weather that affected KwaZulu-Natal over the past few days, all “major oil companies have suspended all operations”.

“This is mainly due to the extensive damage to infrastructure, roads, water and electricity. Bayhead Road, the main access to all fuel depots, has been closed after a large section washed away. We have had to suspend all deliveries until we are able to start loading product out of the fuel depots in Island viewn. We will keep you informed as progress is made in restoring supply,” the Pietermaritzburg-based company said.

Standard Bank has donated R2m to two NGOs in KwaZulu-Natal to provide relief in the form of food, shelter and necessities for people affected by ...
News
2 months ago

A manager, who did not want to be named, said the fuel station he managed in Phoenix, north of Durban, set the limit at R250 per customer.

“We had to put in a limit to allow everyone to have some petrol in their cars. Customers have not been complaining,” he told TimesLive.

He urged motorists to fill up in their areas.

“It doesn’t make sense for people to travel for petrol that will be used by the time they get back home,” he said.