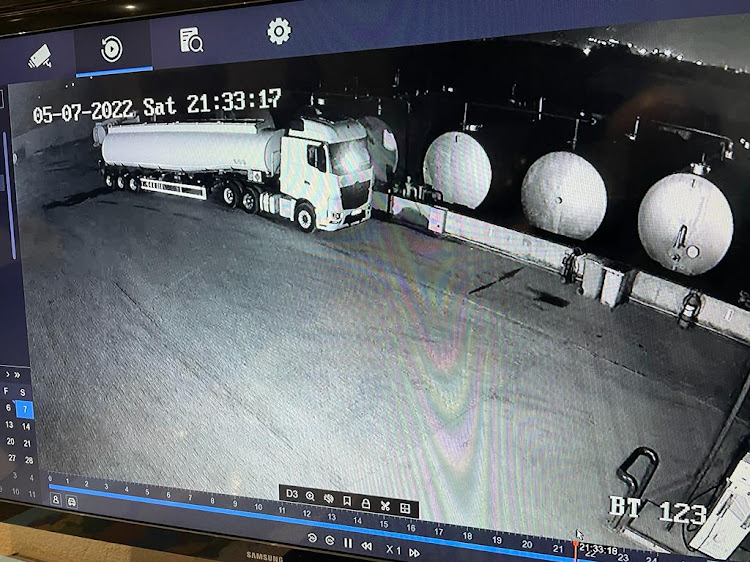 A CCTV image of one of the unmarked trucks used to steal fuel at a Louis Trichardt depot on Saturday evening.
Image: Supplied

Limpopo police spokesperson Lt-Col Mamphaswa Seabi said according to information at their disposal the incident happened at 7pm on Saturday and lasted until 4am as six unmarked trucks filled up at the depot.

The deport is situated on Bronn Street in the industrial area of the town.

Seabi said a manager at the depot, which sells diesel in bulk, opened the gate for a truck which entered under the pretence of being there to buy fuel.

“The occupants came out armed with a pistol and assault rifle. The suspects took the remote control and took two cellphones from the manager,” Seabi said.

He said the manager was also robbed of R6,000 cash.

“They took him and locked him in a room alone. All the other people were locked in rooms separately and tied with cable ties,” Seabi said.

CCTV footage of a robbery at a fuel depot in Louis Trichardt, Limpopo where diesel worth millions of rand was stolen on Saturday evening. One employee was shot by the armed robbers who also stole cash and cellphones. @TimesLIVE pic.twitter.com/3pXbUidCn3

A company driver at the premises was found shot three times and was taken to hospital, according to police.

“The footage captured the trucks coming in the yard. About six trucks came in and filled up with diesel until they spilled over. The suspects are not known and the investigation is continuing,” Seabi said.

When police ran a registration plate fitted to one of the trucks, it came out as registered to a Volvo sedan in Johannesburg.