Gaia the pangolin receiving treatment in a secret location where it was discovered that she is pregnant.
Image: Nicci Wright/Johannesburg Wildlife Vet

Last week's sting operation not only saved a young female Temminck's pangolin from the clutches of poachers, but her unborn pangopup too.

The Johannesburg Wildlife Veterinary Hospital, a non-profit wildlife-only vet and rehabilitation centre, discovered the critically endangered animal's status during a CT scan to establish her condition.

Because pangolins are so highly prized, the vet keeps all pangolin rescues at a secret location to improve their chances of survival and for the protection of staff. The pangolin was saved from the illegal wildlife trade in a sting operation by the African Pangolin Working Group,  the Directorate for Priority Crime Investigation and the department of economic development, environment, conservation and tourism.

She was rescued on Thursday and taken to the secret hospital by Pangolin K9 in an extremely dehydrated state.

The vet has aptly named her Gaia, meaning mother of all life, after the Greek goddess of earth.

According to the vet she was sedated, had her bloods taken and was rehydrated.

In a post on their Instagram page, the vet showed her extreme dehydration with photos taken on the day she arrived looking gaunt, and then three days later having plumped up. 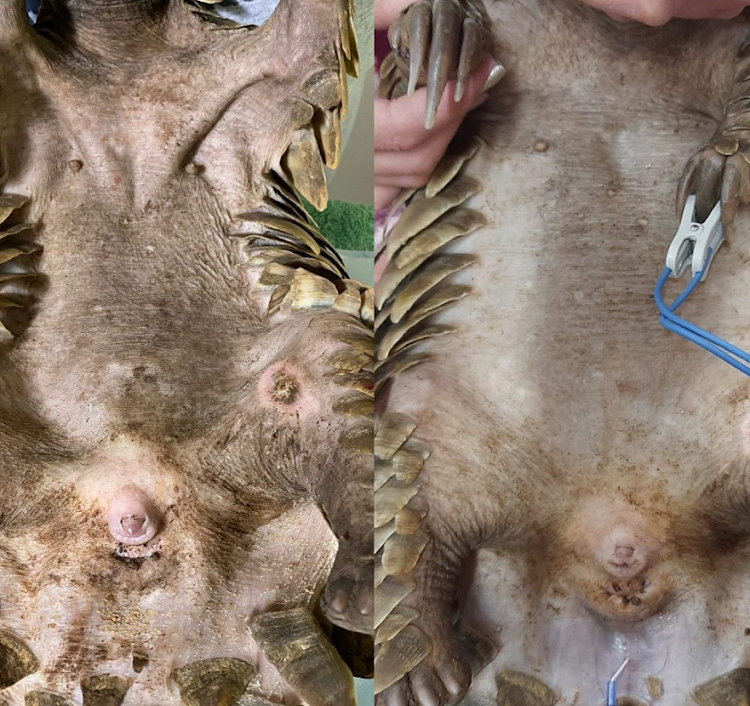 A before and after photo of Gaia, a Temminck's pangolin, shows her dehydrated state on the left when she was rescued, and three days later on the right once she had been rehydrated.
Image: Nicci Wright/ Johannesburg Wildlife Vet

A CT scan revealing her pregnancy also showed she had internal damage from blunt force trauma which was not apparent externally.

“At the moment, her baby is no bigger than a large grape,” the vet said. “It is now even more important than usual to get her safely released as soon as possible to ensure that her pregnancy progresses without undue stress, and so that the baby can be born out of captivity.”

Above: Gaia foraging for ants in a healthier state after her rescue.

The Wildlife Vet treats indigenous animals for free, relying solely on the donations and support of the community.

A recent comedy evening in America raised donations towards paying for CT scans for pangolin patients like Gaia.

Officials in Nigeria — a hub for illegal wildlife trafficking — have seized a record amount of pangolin scales and claws and elephant tusks as the ...
Africa
9 months ago