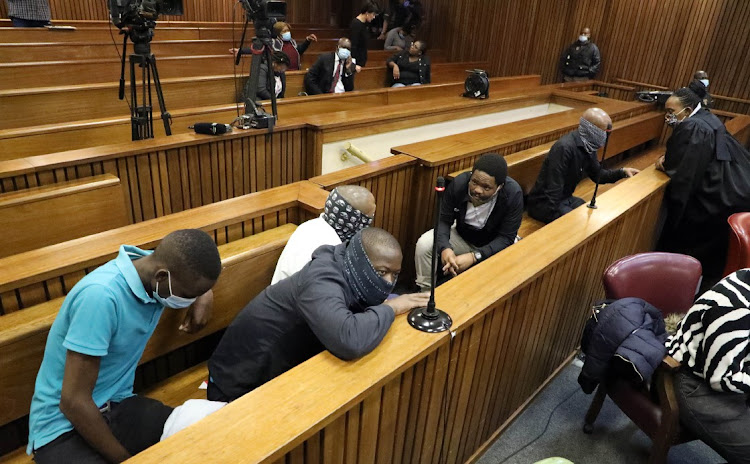 The advocate representing four of the five men accused of murdering Bafana Bafana player Senzo Meyiwa has written to the high court to make an urgent request for the matter to resume earlier than scheduled.

The trial was initially postponed to May 30. Advocate Malesela Teffo wants it to resume on May 18, saying this would be in the best interest of justice, the accused and family of the deceased.

“The defence witnesses for accused one to four are receiving serious threats to their lives from police and we wrote a letter to national police commissioner Gen Fannie Masemola to intervene. However, the national commissioner never responded or acknowledged receipt of our letter,” he said in the submission.

DPP 'did not sanction' arrest of Malesela Teffo inside court

The Gauteng director of public prosecutions was not consulted and did not sanction the execution of a warrant of arrest for the lawyer representing ...
News
2 weeks ago

Teffo charged that the conduct of police on April 28 had undoubtedly violated the rights of accused one to four and their defence counsel in terms of the provisions of section 35(3)(f) of the constitution.

Teffo asked the court to inform the parties in writing before Friday so they could prepare for the suggested date of May 18.

Teffo said he was certain the lives of defence witnesses were in danger.

“We request the honourable court to agree to expedite the trial by bringing it forward as soon as possible. This will be in the best interest of justice, the accused and the family of the deceased,” he said.

"I actually didn't go to her house they said they left and they had taken Senzo to hospital, so I actually met them at the hospital," said Chicco.
Lifestyle
2 weeks ago

They have been charged with premeditated murder, attempted murder, robbery with aggravating circumstances, possession of firearms without a licence and possession of ammunition. They have all pleaded not guilty.

The people present in the house at the time of the shooting were Meyiwa’s girlfriend Kelly Khumalo, her mother Ntombi, sister Zandi, Zandi’s boyfriend Longwe Twala and Meyiwa’s friends Mthokozisi Twala and Tumelo Madlala.

Khumalo's two children — one aged four and the other, of whom Meyiwa was the father, seven months — were also present.