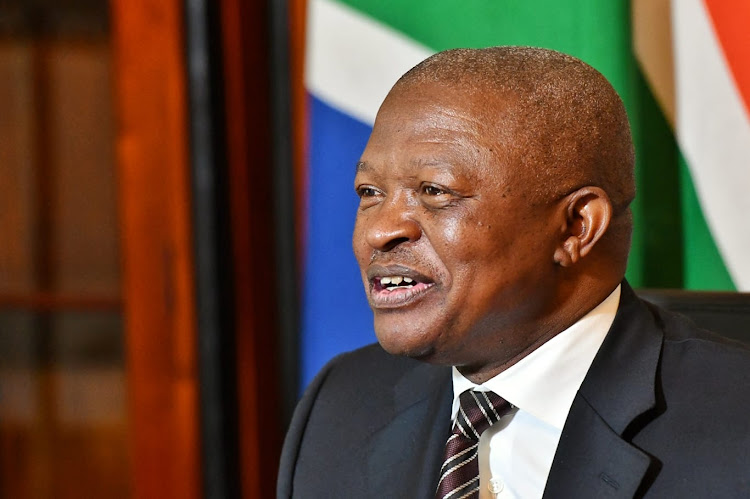 Deputy President David Mabuza said that as of April 30, 8,096 people in KZN were being accommodated in 98 shelters.
Image: GCIS.

Deputy President David Mabuza has told MPs that progress has been made in addressing service delivery issues in several municipalities.

Mabuza was responding to oral questions at the National Council of Provinces [NCOP] on Thursday relating to the interruption of services in KwaZulu-Natal after the devastating floods as well as issues affecting the Maluti-a-Phofung and Sol Plaaitjie municipalities.

On the devastating floods,  Mabuza said a national integrated flood response and recovery plan had been developed.

The province was declared a national state of disaster on April 18.

“As part of the rapid response interventions, the national disaster management centre reported that, as of April 30, 8,096 people in KZN were being accommodated in 98 shelters.”

Much still needs to be done as many communities are still without water, he said.

“Government is conducting continuous technical assessments of costs to determine the extent of damage in affected areas that will determine medium- to long-term interventions,” he said.

Deputy President David Mabuza on Thursday told the National Council of Provinces [NCOP] that placing the blame on the ANC government and the Eskom ...
News
1 week ago

Mabuza reassured the nation that money will not be looted.

“All checks and balances will be put in place to ensure that there is no corruption in the implementation of the post-recovery measures.”

He reminded members that R1bn was pledged by the National Treasury when the disaster struck and explained that “the minister of finance has directed the province to reprioritise some of their programmes so that they can take care of the disaster”.

The department of water & sanitation has delivered about 82 water tankers to the affected families and home affairs has dispersed mobile units to help those who have lost their documentation.

On the service delivery issues facing the Maluti-a-Phofung municipality and Eskom, Mabuza told MPs that in June last year parliament was informed that processes were under way to finalise an agreement between the two parties.

“We further stated that such an agreement would include modalities for collection of revenue, as directed on 8 June 2021 by the court. This view was based on an understanding that the agreement would result in a sustainable resolution of the municipality’s outstanding and escalating debt.”

“Cogta has advised that the two parties are now preparing to go back to court to adjudicate on the matter, and for the court to grant the final order to bring finality to the dispute. This means that as far as the Eskom distribution agency agreement is concerned, this is still subject to court processes.”

In light of the ongoing state of turbulence it’s important to take a closer look at food security issues.
News
10 months ago

Mabuza said Eskom and Maluti-a-Phofung local municipality have since announced a breakthrough in this long-standing impasse and both parties have agreed that Eskom will install protection equipment on the municipality’s substations so that they are able to isolate faults and conduct repairs.

“Eskom will change the billing date from the 15th to the 28th of each month to assist the municipality with additional time for revenue collection and to meet its current bill payment.

“The municipality will pay its current account for the next six months, and thereafter engage Eskom on the payment of the arrear debt. Thereafter, the two parties will reopen the active partnering discussions.”

Earlier this week, Eskom said it had received a R54m payment from the Maluti-a-Phofung municipality which owes it R6.6bn for electricity used but not paid for.

Workers are losing trust in political leadership and public institutions, says Ramaphosa after being booed

President Cyril Ramaphosa says the discontent showed by workers who booed and stormed the stage when he was meant to speak on Workers’ Day was an ...
News
3 weeks ago

The power utility said this was the first time in years that the current account by the municipality was serviced in full.

On the Sol Plaatjie local municipality, Mabuza said, action has been taken to fix the sewer spillage affecting the Platfontein community.

An interdepartmental committee has been establish to identify the main causes of the spillages in the area and assess the extent of the damage and later submit a plan with recommendations on how to resolve the challenges.

“The department of water & sanitation is also working closely with the province on efforts to resolve sewer spillages in Platfontein, and to ensure that economic activities are not disrupted,” he said.