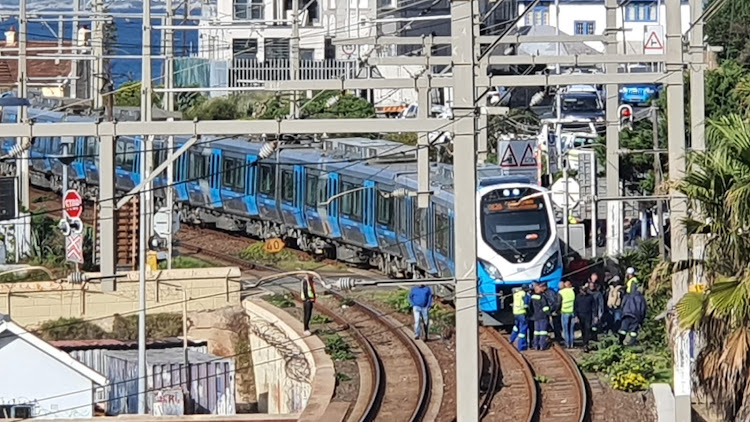 Metrorail confirmed one of its trains collided with a vehicle at a level-crossing in Kalk Bay, Cape Town, on Monday.
Image: Supplied

A Metrorail passenger train collided with a luxury car at a level-crossing in Kalk Bay, Cape Town, on Monday morning.

Eyewitness accounts and pictures on social media show a Mercedes-Benz sedan next to one of Metrorail’s new blue passenger trains.

“We are waiting for further details,” said Metrorail spokesperson Nana Zenani. “Our crew is on the scene conducting interviews and investigations into what happened. We will make that information available as soon as we receive it.”

It was not immediately clear if anybody was injured.

Metrorail advised commuters in a tweet that its train service between Muizenberg/Fish Hoek had been temporarily suspended.

“Commuters are advised to use alternative transport in both directions.”

Three in EL hospital after train carrying 500 crashes into truck

Three people were hospitalised on Thursday after a truck and a car were hit by a train at an East London railway crossing.
News
9 months ago