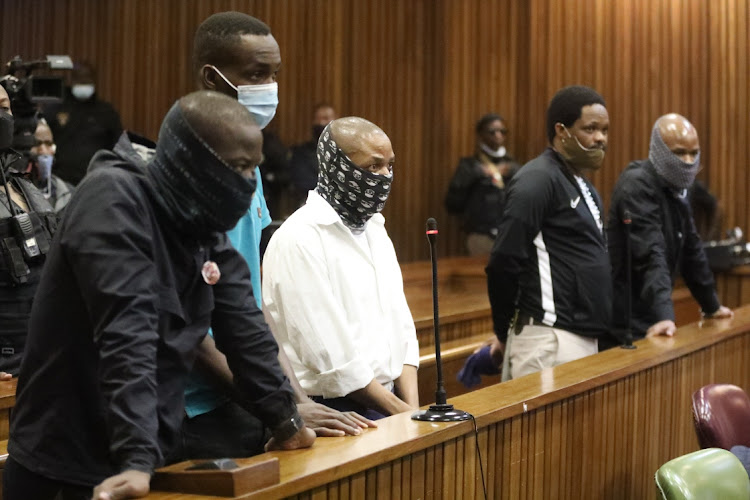 The five suspects who stand accused of the murder of Senzo Meyiwa.
Image: ANTONIO MUCHAVE

The trial for the murder of Senzo Meyiwa had South Africans repeating calls for justice for the slain former Bafana Bafana goalkeeper.

The Pretoria high court sat this week for the cross-examination of Sgt Thabo Mosia, who was called to assess the scene after Meyiwa's murder.

Defence advocate Malesela Teffo grilled Mosia on several allegations regarding Meyiwa's murder, including that the star was allegedly shot by his girlfriend and mother of their child, Kelly Khumalo, by mistake.

He said an “eyewitness” would testify to this and alleged that Meyiwa was taken to hospital when he was already dead. This was to conceal evidence of how he had died, he said.

Meyiwa was gunned down in October 2014 in what was described as a botched robbery in Vosloorus, east of Johannesburg, in the presence of Khumalo, her mother Ntombi, sister Zandi, Zandi’s boyfriend Longwe Twala and Senzo's friends Mthokozisi Twala and Tumelo Madlala.

A witness due to testify in the Senzo Meyiwa murder trial will allege that the footballer was shot by mistake by his girlfriend Kelly Khumalo, the ...
News
2 months ago

Here are five allegations made during the trial that has SA talking:

Teffo said there were two dockets and two investigating officers assigned to investigate Meyiwa's murder. He said the officers had different versions of what happened and were both pursuing different suspects. He said this was unprecedented.

Teffo alleged the firearm used by Khumalo to allegedly kill Meyiwa was a revolver and it belonged to Longwe Twala, former lover of Khumalo's sister Zandile and son of musician Chicco Twala.

Meeting to conceal evidence of the murder

Teffo further alleged there was a meeting between senior Gauteng police management, including former Gauteng safety and liaison MEC Sizakele Nkosi-Malobane, before Mosia was called to the scene.

According to Teffo, the meeting was about how to conceal evidence regarding Meyiwa's murder.

Mosia said he had no knowledge of this meeting.

Removing Meyiwa's body from the scene

Teffo alleged that removing Meyiwa's body from the primary scene of the murder to the hospital was part of the plan hatched by police and Khumalo's family to conceal evidence of how the former Orlando Pirates goalkeeper was murdered.

“It was to dump him at the mortuary of the hospital because the people in the house already knew that he had passed on and it was further done to avoid the relatives, friends or the people known to Senzo as he was supposed to go and attend the birthday party of his colleague,” said Teffo.

Attempted robbery and scuffle between Meyiwa and suspect

Teffo asked Mosia if he didn't think it was strange that “robbers” only targeted Meyiwa and not the other occupants in the house, to which he said it was possible for other people to have survived the robbery.

“It is possible. I explained previously that it's possible for one person to get shot during a robbery and for others to survive,” said Mosia.