'I tried to call, she didn't answer': Mother's relief after kidnapped daughter rescued from car boot 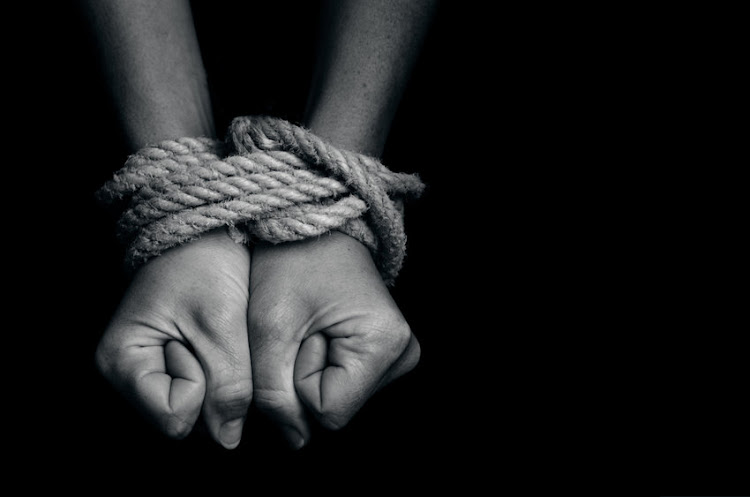 The kidnapped woman was found in the boot of her vehicle hundreds of kilometres from home. Stock photo.
Image: 123RF/rafaelbenari

“I am grateful to God my daughter has returned.”

These are the words of a mother whose worst fears were realised when her 30-year-old daughter was allegedly kidnapped on Monday and bundled into the boot of her Audi Q2 by bricklayers renovating her home at De Aar in the Northern Cape.

The victim, an employee at the Pixley ka Seme district municipality, was rescued hours later at a Grasmere filling station more than 700km away on the N1 south of Johannesburg.

She had visited her daughter at home on Sunday afternoon but could not stay over as the property was being renovated.

“During the night — I think around 7pm — I tried to call her but she didn’t answer,” she said.

A woman bundled into the boot of her own car by alleged kidnappers has been rescued at a Grasmere filling station on the N1 south of Johannesburg.
News
2 weeks ago

She called again without luck on Monday morning. She and her other daughter then went to the house and did not find anybody there. “I tried to call her around 10am but she was not answering and I asked my friend to phone her.”

The missing daughter replied with a strange message to her mother’s friend. At that moment they did not suspect anything was amiss. But the mother got a cryptic message from her daughter at about 3pm. It said: “I love you,” accompanied by a face and heart emoji.

“I sent a message back and asked, 'where are you because you are not answering the phone?' and she replied 'sorry ma'.”

“I think 10 minutes after that a friend of hers was saying [my daughter] sent a funny message and said she was in danger. She said we mustn’t talk in English and something like that because people are looking at her, they are watching her,” said the mother.

Then it dawned on her that something was terribly wrong and they contacted the police.

“I was stressing now, from there we contacted other people and the police station. When they were filling in the docket, it was now that things were serious,” she said.

All this time I think she was keeping calm, that’s why she could have the phone to send messages they were not aware of

Police visited her daughter's home and suspected that the missing builders could be behind the abduction.

“I think all the time she was in the boot. I think when they were in the Joburg area she could send the location to one of her friends and they followed that location. Somebody phoned the [tracking company] and they came together and got closer to her car,” she said.

“They [kidnappers] were with her, fighting her, but all this time I think she was keeping calm, that’s why she could have the phone to send messages they were not aware of.”

Her daughter explained later that she was left without a cent as her abductors forced her to deposit all her money in their account.

The mother suspected the bricklayers knew her daughter's whereabouts as she stayed alone. Different people had been involved with the renovations since early January.

Tawana said the victim had employed the two men as bricklayers.

“On Monday, the two allegedly kidnapped the victim ... and stuffed her in the boot of her Audi Q2 and drove off with her. The victim was in possession of her cellphone, and she managed to communicate with her mother via WhatsApp about the kidnapping ordeal and theft of her motor vehicle,” she said. 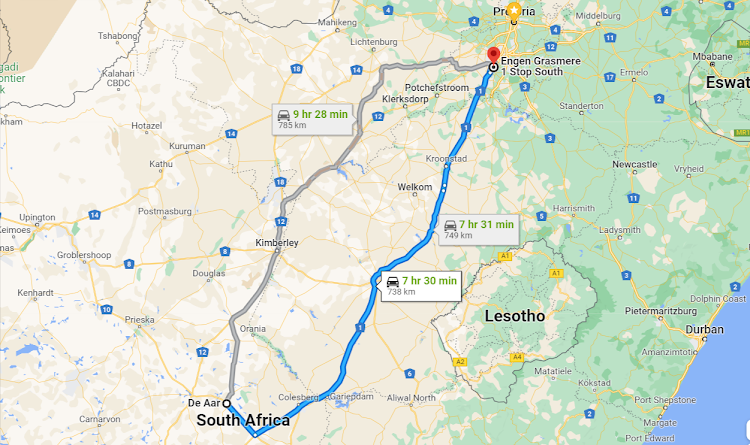 The distance travelled by the alleged kidnappers.
Image: Google Maps

Police in De Aar reacted promptly and launched a search and tracing operation, circulating details of the missing vehicle.

Khubashe said they had assisted the police. “We don’t want to divulge anything that might hinder the investigation.”

The search led the team to a Grasmere filling station on the N1, south of Johannesburg, where the woman was found in the boot of her vehicle.

“The victim sustained bruises as a result of the scuffle that ensued during the kidnapping. With the assistance of the Johannesburg highway patrol, including private security in Grasmere, the suspects were apprehended,” said Tawana.

The district commander of Pixley Ka Seme, Brig Nomana Adonis, expressed her gratitude to all involved in the arrest of the suspects.

The victim is not being identified, at the request of police, while investigations continue.