Witness protection must also be extended to include people who could potentially be in danger because they witnessed corruption as well as their families and close associates, writes Dr Johandri Wright

OPINION | Whistleblowers in SA have some protection but gaps need fixing 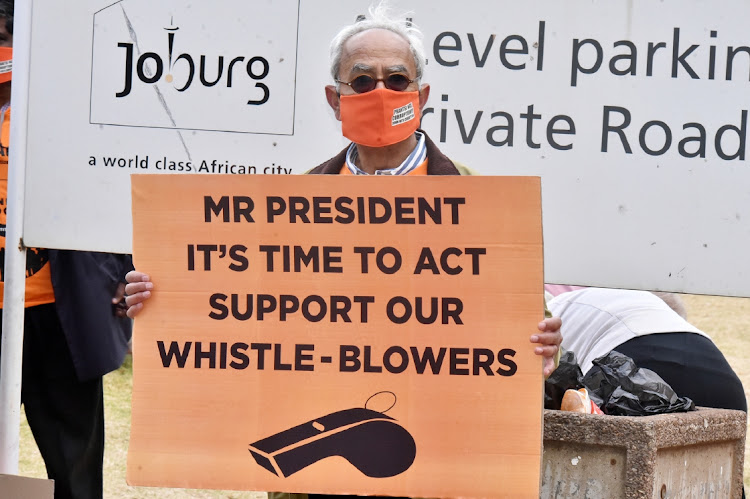 The Active Citizen Movement protest outside the Judicial Commission of Inquiry into State Capture venue in Johannesburg calling for the protection of whistleblowers. The writer argues that SA’s whistleblower protection regime is too restrictive. It protects certain disclosures only, leaving many whistleblowers unprotected.
Image: Freddy Mavunda

Every person in SA has the right to a functioning local government that can provide basic services such as clean water, electricity and sanitation. But corruption has left much of this sphere of government unable to fulfil its role.

The watchdog organisation Corruption Watch, which is the South African chapter of Transparency International, received 5,094 reports of corruption in local government from 2012 to 2020.

Most of the disclosures were by whistleblowers in the offices of the municipal managers and the police departments. Whistleblowers are people who report actions that are illegal, fraudulent, criminal, or corrupt – often within their own organisations. They often find their lives at risk and irrevocably changed as a result. They sometimes lose their jobs or even get killed.

Moss Phakoe, a councillor in the Bojanala Platinum District Municipality in North West province, was shot in 2009 after exposing corruption by councillors and officials.

Babita Deokaran, a key witness in the investigation of an allegedly corrupt multi-million rand tender in Gauteng province, was shot dead in August 2021.

I recently concluded a doctoral thesis in which I critically explored, from the perspective of the law, how corruption in local government can be prevented.

Four SA whistle-blowers, including the slain Babita Deokaran, were honoured at the "Blueprint for Free Speech Whistleblowing Awards", which were held ...
News
7 months ago

A subsection of my thesis examined legal protections for whistleblowers in the country, and how they might be improved. This part of the study was limited to analysis of legal literature as well as international and national laws and policies.

The findings show that SA’s whistleblower protection regime is too restrictive. It protects certain disclosures only, leaving many whistleblowers unprotected.

I also found that witness protection is only used in exceptional circumstances, leaving many whistleblowers exposed to danger. The research further showed that the country could benefit from amending certain pieces of legislation to improve protection. That might encourage more people to report public sector corruption, which is rampant.

My research shows that whistleblower protection in South African law and policy has two main components. The first relates to witnesses in criminal offences.

South African law and policy boasts a good deal of protection for witnesses and the integrity of evidence relating to corruption as a statutory offence. Statutory corruption is the offering of or promising of benefit to a person, and receiving or accepting such a benefit to act in a manner which may be illegal, dishonest, unauthorised or biased. Such actions may also amount to the abuse of a position of authority, breach of trust or the violation of a legal duty, or a set of rules.

This excludes unilateral abuses of power, favouritism, diversion of public funds, and favours done for the benefit of an institution, rather than for personal gain. For example, a human resources officer may appoint an employee (regardless of the person’s ability to do the job) upon the instruction of his or her political leader to improve the political party’s influence in a municipality.

Witnesses to corruption are offered protection under the Witness Protection Act of 1998. This includes relocation, changing the witness’s identity and other related assistance. But this protection is limited to people who are to give evidence in court.

The second part of whistleblower protection falls under the Protected Disclosures Act of 2000. It protects certain disclosures made by employees against their employers. A protected disclosure is any information which may show that a crime was committed. The act only affords protection for disclosures which relate to statutory corruption.

This protection extends to public officials who make a disclosure against political office bearers. The main objective for protected disclosures is to protect employees from being victimised for reporting corruption.

A Buffalo City Metro cleaner claims she has been fired after blowing the whistle on alleged RDP housing allocation fraud.more Bukeka Maxeke from ...
News
7 years ago

Protection under the Protected Disclosures Act is afforded through remedies for any occupational detriment suffered as a result of such a disclosure. This may involve compensation, or other remedial action.

The application of the Protected Disclosures Act is limited to occupational detriment and employment relationships. It excludes commercial relationships such as parties to a procurement agreement. This is a serious flaw, given the extent of procurement corruption in the country.

Furthermore, these disclosures are only protected if made to the public protector or the auditor-general. Other competent bodies that can investigate and prosecute corruption, such as the police or the National Prosecuting Authority (NPA), are excluded.

Both parts of witness protection focus on the physical safety of whistleblowers or protecting their current employment conditions. No provision is made for future job security, or financial, emotional, legal or other support for whistleblowers and their families.

My research revealed that whistleblower protection must be improved to encourage people to report corruption. Parliament should amend the definition of protected disclosures to include those made by people who are not in an employment relationship with an accused. That would include protection for parties to a commercial relationship, such as a procurement contract or tender award.

Witness protection must also be extended to include people who could potentially be in danger because they witnessed corruption as well as their families and close associates. This would encourage even more people to expose corruption.

Doing so would give anti-corruption authorities such as the NPA  and the public protector greater access to the evidence needed to combat corruption.

SA could also benefit from having a dedicated institution to oversee whistleblower protection. Such an institution should further provide support services, such as legal representation and advice, to current and potential whistleblowers.

It should also provide psychological and social support services for whistleblowers and their connections. This will help ensure that witnesses are able to participate in the entire investigation and prosecution of corruption.  — This article was originally published in The Conversation