Male student fled scene and is still on the run, says MUT spokesperson 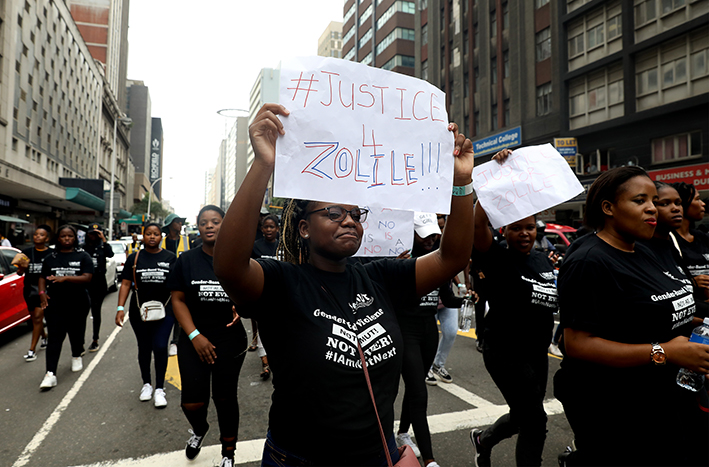 MUT students marched in March 2020 to the Durban high court before judgment in the trial of Thabani Mzolo, who murdered Zolile Khumalo in May 2018. Another MUT has been killed, allegedly by a male student. File photo.
Image: Sandile Ndlovu

A 23-year-old female Mangosuthu University of Technology (MUT) student was allegedly killed by a male student at the Ark Royal residence in Durban over the weekend.

“It is so hard to communicate right at the beginning of women’s month the heartless and brutal killing of Xolile Mbatha, an electrical engineering student,” said MUT spokesperson Bheki Hlophe.

“I am at a loss for words to describe this dreadful act [allegedly] performed by a fellow male student at the Ark Royal residence, one of MUT’s externally leased residences. Xolile died on the morning of Sunday.

“The murder is the subject of a police investigation. It is believed that the male student fled the scene and is still on the run. While MUT is trying to come to terms with and get details of what transpired yesterday morning, we appeal to staff, students and the public to co-operate with the police and to come forward if they have any information that could help the investigation.”

The university has appealed to men to treat women with dignity and honour.

“We wish to remind everyone affected by this tragic incident that MUT has also made counselling services available through the student counselling unit.

“These services can be accessed by contacting the unit at studentcounselling@mut.ac.za or by calling (031) 907-7186. The university wishes to send its heartfelt condolences to the Mbatha family in this difficult time.”

Ilitha Labantu, an organisation that supports the rights of women and children, said it was “deeply concerned” about the high prevalence of violence against women and femicide.

“SA finds itself in a peculiar position that in light of having one of the world's most progressive constitutions, with laws that seek to protect the rights and dignity of women, children and vulnerable persons (the elderly and people with disability), we have a monstrous record of gross human rights violations against women,” said spokesperson Siyabulela Monakali.

Four years ago, a 21-year-old student at the university, Zolile Khumalo, was shot dead by her ex-boyfriend, Thabani Mzalo, at the Lonsdale student residence in the Durban CBD.