Diving into a promising future 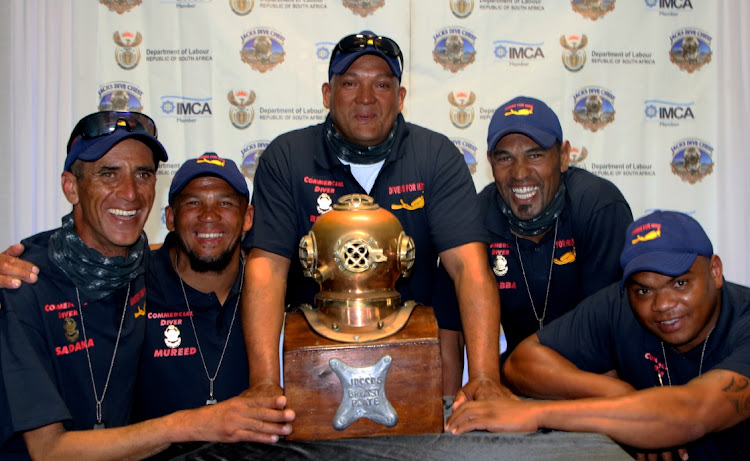 They took the plunge in an effort to build a better life and now five men from historically disadvantaged areas of the Eastern Cape have earned diving qualifications that will allow them to work anywhere in the world.

Four of them are from Schauderville and the fifth is from New Brighton.

All have longed for a career in the maritime space but found that some dive schools would not touch them as there seemed to be a perception that many from their areas were involved in perlemoen poaching.

The men qualified as commercial divers thanks to a collaboration between Divers for Hire and Jack’s Dive Chest, a commercial diving academy.

Trevor Bailey, of the diving academy, said the qualification the men had achieved was one of only five that were accepted across the globe.

“So these gentlemen are not restricted to work in Nelson Mandela Bay or the Eastern Cape,” he said at the men’s graduation ceremony on Saturday.

“The training received here is valuable and this is a great qualification and opens many doors.

“I have trained many guys and been active in commercial diving training since 2004 and many of [the people he has trained] have gone on to do great things.

“Good luck to all these guys.”

One of the divers, Leverthon Andrews, 44, has been diving since his late twenties and said the qualification was going to propel the group from being recreational divers to being internationally recognised professionals.

“The training has been rigid and tough,” he said.

“Nothing like I had ever experienced, but that is how they prepare us for diving under strenuous conditions.

“We do not take that lightly and we can now go into various fields like perlemoen ranging and diving commercially for maritime services and assisting the Nelson Mandela Bay municipality with some of its water and waste management.”

The other men who qualified were Sadaka Rafferty, Mureed Classen, Deon Whitebooi and Eugene Jacobs.

Siya Somntu, of Divers for Hire, a black-owned and managed enterprise that set out to establish itself as a commercial diving entity of choice in Nelson Mandela Bay and beyond, said several attempts to get training for the group had been made since 2012.

“Promises made by diving enterprises to provide the requisite training were not fulfilled,” Somntu said.

“It would appear that a major deterrent to the fulfilment of such promises was the perception that the incumbents were rightly or wrongly associated with perlemoen poaching.”

He said they had been assisted by the department of labour, and especially the office of director-general Thobile Lamati who enabled the procurement of the services of Jack’s Academy to provide the training programmes.

The harbour master at the Port Of Ngqura, Captain Thulani Dibeko, said the graduation was a milestone and marked a significant turning point in the transformation of the maritime space.

This is a historical moment, a new beginning for black people and for the next generation

“This is a historical moment, a new beginning for black people and for the next generation,” Dibeko said.

“This is one of the things we talk about when we talk about Operations Phakisa, which is a call to grow and transform the oceans economy and create jobs in that industry.

“The industry still has a lot of challenges.

“The change has been slow but we will get there but as we transform we must remember to keep improving and keep the quality and competence.”