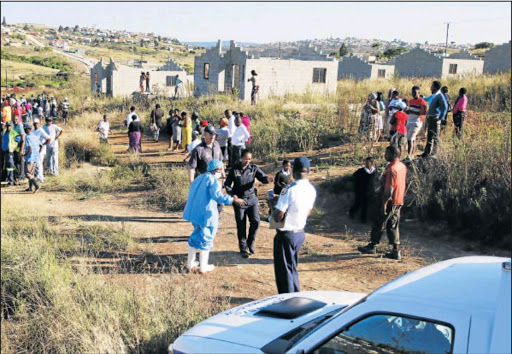 One of the areas that still has unfinished houses is Daluxolo in NU6, where two dead bodies were found earlier this year. The unfinished houses have been used by criminals as a schoolgirl was also allegedly raped inside one of the houses.

The demand for the investigation comes after the party conducted a site visit in Mdantsane in February looking into housing troubles.

IFP MP and national spokesman for human settlements Khethamabala Sithole said the party called on the Human Settlements Minister Lindiwe Sisulu and public protector Busisiwe Mkhwebane to investigate why the beneficiaries of the housing project were still without houses.

The tender for the construction of 908 RDP houses was awarded to Siyavuna Trading company at the cost of R163.7-million and was supposed to have been completed in April this year.

“In 2015 Walter Sisulu informal settlement residents in Mdantsane were moved to make way for the Mdantsane cluster 2 housing project but till today residents still have no houses.

“Most of the houses are still at foundation level, but about 30 houses already have windows and doors.

A total 154 houses were supposed to have been built in Walter Sisulu informal settlement, 336 in Winnie Mandela, 34 in Francis Meli, 105 in Hani Park, 91 in Mahlangu, 25 in Gwentshe, 75 in Mathemba Vuso and 88 houses in Daluxolo informal settlement.

A letter sent to national portfolio head for human settlement Nocawe Mafu by the IFP called for action to be taken against Eastern Cape human settlements MEC Helen Sauls-August and Sisulu.

“The IFP wants to get answers because it is of the view that corruption is involved and public funds have been squandered while people are still without decent houses,” Sithole wrote.

Earlier this year the Daily Dispatch reported that BCM had instead cut the project from 908 RDP houses to 266. This would cost R62-million.

Former acting city manager Nceba Ncunyana said at the time the tender was amended following negotiations between the metro and company awarded the tender.

The tender was amended after BCM failed to complete site plans for the areas where many of the new houses were built because of the informal dwellings.

Relocation delays were also experienced resulting in construction work suspended in some areas.

On Friday, BCM spokesman Samkelo Ngwenya said the delays to the projects had been caused by disputes between contractors.

“The matter has been referred to the municipal legal department for inputs leading to the finalisation of the matter.

“It pains us when we we are confronted with challenges of this nature despite financial and the resources we put in.

“We are however optimistic, that this year that government has set aside to mark struggle stalwart Oliver Tambo, we will make significant progress and bring joy to the many families who have been patiently waiting for us to deliver this service,” he said yesterday.

Sisulu’s spokesman Vusi Tshose said the department would conduct an investigation to ensure that the allegations were thoroughly probed.

“I can assure you that it is in our intention to act in this matter because when there are delays in projects the department suffers a lot of money as the money doubles the initial budget,” said Tshose.

Provincial human settlements spokesman Lwandile Sicwetsha said they had not received any letter from the IFP. — mamelag@dispatch.co.za