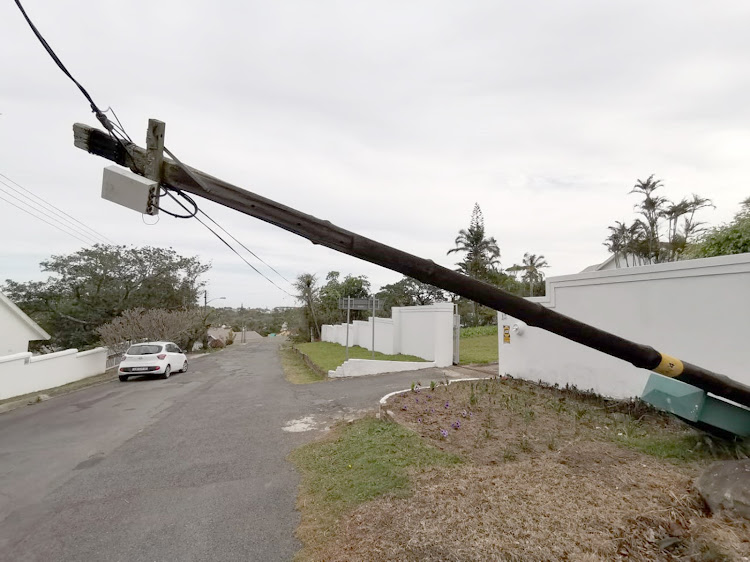 BIZARRE SIGHT: Residents of Walmer Road in Beacon Bay have expressed alarm at the metro’s failure to remove this electricity pole, which was blown over by a gale on Monday, with some fearing the cables might be live
Image: ALAN EASON

An electricity pole which blew over in a gale on Monday and came to rest with its cables suspended across a suburban East London road had still not been attended to by Wednesday evening.

The Buffalo City Municipality was alerted, but two days later, the bizarre sight of the pole leaning over the pavement next to a bed and breakfast establishment — its cables within striking distance of passing traffic — continued to bemuse passing motorists.

Residents of Walmer Road in Beacon Bay expressed alarm at the metro’s failure to respond, with some expressing anxiety that the cables might be live.

Attempts to get comment from the municipality were unsuccessful on Wednesday. A response was expected by Thursday.

A school building was struck by lightning as heavy rains lashed East London and other parts of the Eastern Cape on Monday. By 2pm, 4.8mm of rain ...
News
2 years ago

“What if a vehicle hits them?” she said.

The owner of the B@B, Khuthaza James, said she had reported the incident as soon as she became aware of it on Monday night.

“We were shocked when we went outside and the saw this pole hanging the way it is.

“On reporting the incident the [municipality] person sounded annoyed and told us this had already been reported.

“Three days later nothing has been done,” James said.

“Some of my customers drive trucks and they might snap the wires because they are hanging so low.”

She also said she was concerned for the safety of the children in the neighbourhood.