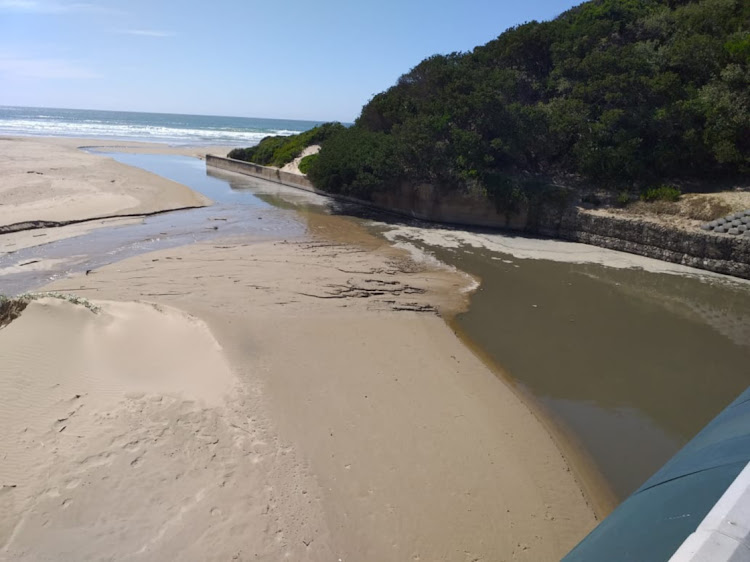 Beachgoers were outraged when Buffalo City Metro’s pump house station failed and the contents of sewers serving the suburbs of Vincent, Berea, Stirling, Bonnie Doon and Nahoon surged into the Ihlanza River mouth, across Nahoon Beach and into the sea on Wednesday.

The shout went up from walkers and swimmers at dawn that the “Turdy”, as the tributary is known, was filthy and by 8am the Dispatch was on the scene.

The contents of the overflow pipe from the station were gushing out of the bush into the river and a large, olive-grey spume roughly the size of two tennis courts spread upstream.

A cormorant  was seen drying its wings on a plastic drum in the midst of the scum.

At the pumpstation, Bentley and McDowell said a BCM electrician was on the scene and had dealt with “faulty batteries”. The station was apparently back in action.

BCM technicians did not want to comment and referred the Dispatch to their seniors.

McDowell later posted that the problem had been resolved, but Save Nahoon spokesperson Kevin Harris said: “Nothing is solved. People and wildlife have been compromised by thousands of litres of untreated sewage, which flowed all night.”

BCM spokesperson Samkelo Ngwenya said: “We had a breakdown due to a lack of communication between the East Bank [treatment works] control panel and Ihlanza pump station which caused the overflow that led to the closure of Nahoon Beach for the public’s safety.

“The situation has been resolved and chlorine has been put into the Nahoon (Ihlanza) River to cleanse the river. The water will be tested later and Nahoon Beach will be reopened once the chlorine has cleared.”

Thousands of litres of raw sewage spewed into the Nahoon River on Tuesday, leaving a stinking, concentrated slick of black-blue water in the stretch ...
News
2 years ago