Black Friday: In the crush and rush, many shoppers strike gold 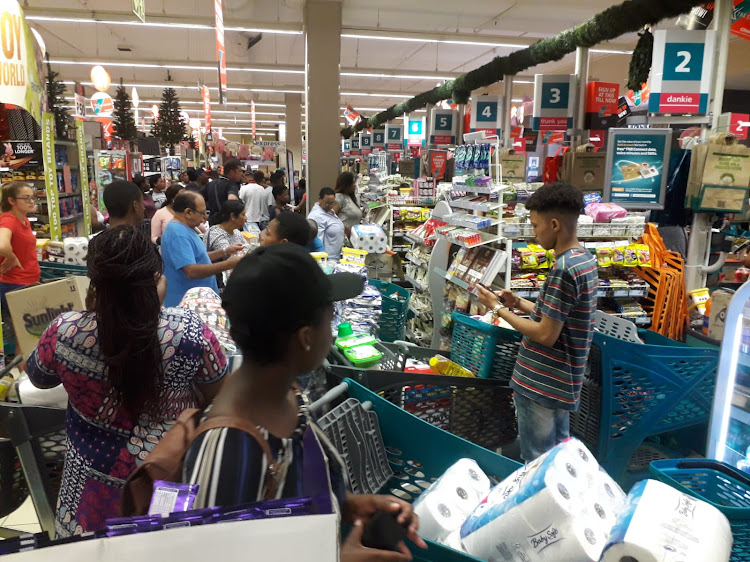 Checkers at Hemingways was packed with shoppers looking for the best bargains.
Image: Ziyanda Zweni

Most shoppers in Hemingways Mall in East London left with happy smiles and the excitement of having purchased everything they wanted to buy on Black Friday.

Although the mall was not too packed, many shops opened by 7am.

A few shoppers were seen by the Dispatch making runs to unpack what they had bought in their cars and returning to buy more. Some arrived in the shopping mall as early as 5.40am.

Andiswa Mdoda joyfully pushed a trolley with a 50-inch plasma TV she had bought for R3,000 from Pick n Pay.

“I had always wanted this TV but I did not have money for it,” Mdoda said. “I woke early to ensure that I got it. There were not many people in the shop.”

Members of the public arrived as early as 6am at the Checkers supermarket in Hemingways, waiting for the doors to open. At 7am, scores of shoppers pushed forward to be first to set foot inside the shop.

Among those were Nowethu Wanga, 51, from Amalinda, who waited patiently while enduring pain in her injured right knee.

She spoke to the Dispatch while pushing her trolley loaded with items such as toilet paper and cereal.

“I got everything I wanted to buy,” Wanga, who felt that people with physical impairments should have been let in first, said.

Queues were often about 20 people long. Trolleys were loaded high and shoppers' faces shone with perspiration.

A chirpy Lutho Mpateli, one of the first customers to get out of Toys R Us, happily clutched his PlayStation 4 box.

“I begged my mother to buy me one. She dropped me off here at 6.30am and I waited till the shop opened. I am happy and I will go home and play it right now,” Mpateli said.

“I used to play with friends outside, but this will keep me indoors now.”

Coceka Mqalo arrived to a packed Checkers and could not find a trolley..

“That does not bother me though. I will still buy what I came here for.

“I chose to come to this mall as it is safer than going to town and making runs in shops in different streets.”

Liwile Madala, from Mdantsane's NU13, took advantage of the discounted prices and bought tickets to festive parties such as London Roots and Heatwave.

“I saved R2,000 for Black Friday and I will use some of the money to buy clothes,” said Madala.

Chaos and strange scenes marked the start of Black Friday in East London with crazed shoppers pushing their way into at least one store amid a ...
News
1 year ago