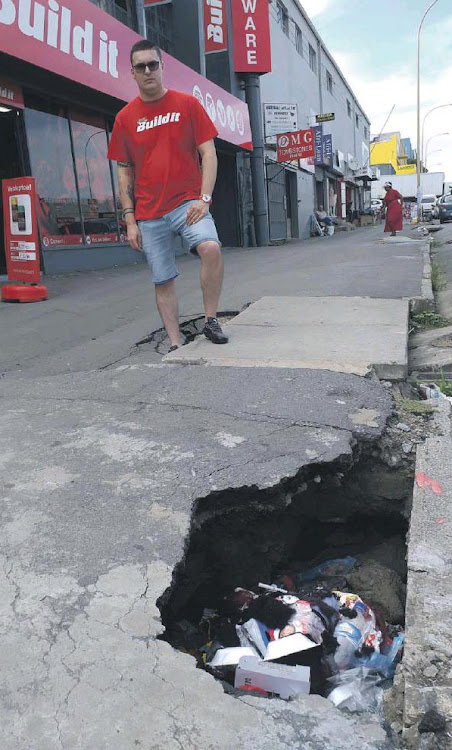 Multiple attempts by Spar group franchise Build it to reach out to BCM over collapsing pipes in Buffalo Street which were injuring customers, finally received an official response after DispatchLIVE sent the metro questions last week.

BCM spokesperson Samkelo Ngwenya said on Friday that the query had been sent to the relevant department for remedy.

Van der Merwe writes: “Hi, Mr Delport, I have received a complaint regarding the sidewalk outside Buffalo [Street] Build it. We are currently working in Gladstone Street and going into Albert Street. We can come have a look at the area that is a problem.”

Delport said he was very surprised at the BCM engineer’s response, saying it sounded like he had never been to Buffalo Street before, even though it was at the core of bustling downtown East London.

He said the metro’s fresh response also felt strange since he had kept a meticulous log of his attempts to get BCM to fix collapsing infrastructure.

His first attempt was on July 18 2019, when he reported the fault to BCM's online system and “I got no response” with a follow-up on August 8, he said.

He then widened his e-mail queries to include his ward counsellor, and the mayoral committee and infrastructure services, and after six attempts which ended five months later on December 6, he telephoned BCM’s roads and storm water department and was told a supervisor would call back. This did not happen.

His final shot was on December 16, when he tried the city leadership, starting with the mayoral committee, and then, in February, he contacted the Dispatch.

He had made nine formal attempts to get a response from the city.

On Wednesday, he showed Dispatch the pavement problems.

BLURB: On Wednesday, amaBhungane revealed the names of companies benefitting from the R4-billion-a-year Community Work Programme. Then the Daily ...
News
1 year ago

Broken pipes, caved in pipes, leaking pipes and bits of cracked concrete blocks are strewn along the entire pavement.

People were seen stepping aside, and over the broken and sunken pavement.

Of great concern was a 15cm rugby-ball sized dent in the tar right at Build it’s doorstep.

Build it salesman Quinton Schoeman said he had stood on a drain cover and fallen down for a metre, grazing and bruising his legs.

He showed the Dispatch a scar on his ankle.