Slavery back in Africa 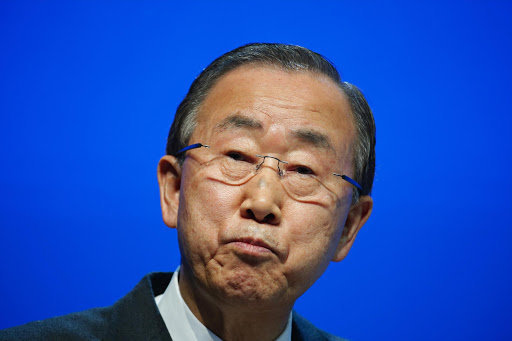 United Nations secretary-general, Ban Ki-Moon
A conference of the African Union in Addis Ababa agreed last week to set up a five-nation regional task force to combat the Islamist terror army of Boko Haram which is tearing apart Nigeria and Cameroon and has its sights set on Chad.

The United Nations secretary-general, Ban Ki-Moon, who attended the summit responded: “I welcome the decision of the AU and regional countries to establish an MJTF (multinational joint task force) against Boko Haram. They have committed unspeakable brutality.

“Those terrorists should be addressed with a regional and international cooperation. Not a single country, even the regional countries, can handle this alone,” he said. “The United Nations is ready to fully cooperate with the African Union.”

In complete contrast, the South African government has so far declined to see that there is now a violent new state on the continent, soaked in blood to its armpits, threatening the AU and every principle on which the ANC and the South African Constitution were founded: The Islamic Caliphate in Africa!

Enslaver of women and girls, slaughterer of men and boys, dealer of death to Christians, and ruthless joker in defiance of the Nigerian government – the Sunni Muslim dictatorship of Boko Haram now swanks around northern Nigeria and western Cameroon, in ideological alliance with the Islamic Caliphate in Iraq and the Levant/Syria (ISIL or ISIS), al-Qaeda in Yemen and Mali, ISIL in Egypt and Libya, al-Shabaab in Somalia and Kenya, and the jihadi murderers of cartoonists and Jews in Europe.

Early last month the fascists of ISIL captured 20 Egyptian Christians in Libya, who face the prospect of a horrible death. Last week they launched a major attack in Tripoli, the Libyan capital, which left 10 people dead, and almost simultaneously their Egyptian affiliate killed more than 30 government soldiers in an attack in the country’s North Sinai province.

How did it come to this?

Twenty-five years after the release of Nelson Mandela, how are Africa’s hopes of freedom turning into nightmare?

The dream of African unity now reveals a threatening fault line, with the prospect of a war across the continent and across the world that might last a generation.

This did not come out of nowhere.

It is time to sweep away illusions. The first of these is that religion is not a political reality in Africa.

During the 20th century differences in religion created no distinctions in the ANC, or the Pan Africanist Congress, or the Azanian People’s Organisation (Azapo). In the same way, the impetus to de-colonisation in Africa given by a Pan African Congress held in Manchester in England in 1945 – prepared and organised by George Padmore, CLR James, Kwame Nkrumah, WEB du Bois and others – never included any idea that religion should define the future of independent African states.

It is true that the borders of these states as they became independent – such as Ghana in 1957, formerly Britain’s colony, the Gold Coast – followed the frontiers set down by the major European colonial powers, Britain and France (and after 1974, Portugal). But just as states across Europe and north and south America long ago removed religion as the criterion for citizenship, so too the concept of the modern African nation was defined as one embracing peoples of all religions, and of none.

While Islam lay just beneath the surface of the newly independent Arab states of North Africa as a powerful organiser of daily life and social behaviour, and similarly across the northern area of West Africa and down much of East Africa into Mozambique, it was never suggested that an independent African state should be defined by religion.

This concept of the nation state was powerfully reinforced by the influence of the Soviet Union – a specifically atheist state embracing peoples of many different cultural backgrounds and grounded in the secularist philosophy of dialectical materialism.

Soviet support for political struggles in Africa against the colonial powers and the white minority regimes in Rhodesia and South Africa, strongly reinforced the principle that the state should not enforce religious apartheid.

As with the divisive influence of tribalism in many African polities, it was

always held that religious discrimination would separate and weaken African peoples, and impede their economic and social development, if religious differences were to define the boundaries of political loyalties.

In this most profound sense, the idea that African identity should be defined politically by religion is an attack on the most powerful and historically most inclusive political tradition in South Africa, that of Nelson Mandela, Steve Biko, Robert Sobukwe and Nkosi Albert Luthuli, going back to John Langalibalele Dube and his fellow founders of the ANC.

The pioneers of South African freedom would be writhing in their graves, if they knew of the slaughters now taking place in west, east and north Africa, in the name of religious dictatorship.

The philosophy of the Congress Alliance, which grew out of the Doctors’ Pact of 1947 between doctors Xuma, Dadoo and Naicker – not to mention the basic moral philosophy of the Communist Party and the Liberal Party, forerunner of the Democratic Alliance – was premised on the belief that not only race but also religion should not divide the people.

“The People Shall Govern!” declared the Freedom Charter, in its first principle – not “Religion X Shall Govern”.

South Africa cannot remain isolated at the tip of the continent when its founding moral ethic – won through blood and tears – is being violated in west, east and north Africa. If South Africans shut their eyes and ears, these horrors will break through even the strongest door.

Events in Africa are right now racing ahead of consciousness. It is important to speak plain facts.

In West Africa, Boko Haram now has a capital, Gwoza, a well-equipped army and a leader, its “emir”, Abubakar Shekau. It controls scores of towns and villages in the states of Borno and Yobe, extending south into Adamawa state, with a surface area of 52000km² – three times the size of Swaziland – and a population of more than 1.7 million.

Informed observers believe a major reason for Boko Haram’s advances is because of the corruption and incompetence of the Nigerian state, leading to the failure of the country’s army to stand up to the insurgents.

British analyst David Blair explains that Boko Haram is a “Kanuri tribal insurgency”, stretching across Nigeria’s state frontier into Cameroon, where 68 government soldiers were killed in December, while Boko Haram killed an estimated 2000 people last month in the Nigerian town of Baga. This happened at the same time as the jihadi killings of cartoonists, Jews and police in France.

Last month Boko Haram even sent a 10-year-old girl as a suicide bomber into a market in Maiduguri, the provincial capital of Borno state, where she killed 20 people, including herself.

As Shekau recently stated: “This is just the beginning of the killings. What you’ve just witnessed is a tip of the iceberg. More deaths are coming.”

And with these horrors, slavery is now back in Africa. The slave trade has re-emerged across a swathe of west Africa, in which captured women and girls are sold for profit.

Shekau is completely open about this. In a YouTube video he promised to sell into slavery the mainly Christian schoolgirls whom Boko Haram captured in the town of Chibok, stating: “Allah instructed me to sell them: they are his properties. I will sell them in the market by Allah.”

Shekau, says Blair, “boasts about how Boko Haram enslaves women. The logic – if that is the right word – appears to be as follows. Women are the property of Allah and Shekau is waging his campaign on behalf of Allah. Therefore when women fall into Shekau’s grip, they become his property to dispose of as he thinks Allah would wish. The Chibok girls had offended Allah by (a) being Christian and (b) going to school. Therefore Allah would wish them to be enslaved.

“This tortuous rationale for reintroducing slavery is also used by ISIL in the Middle East, which has enslaved thousands of women and children from the Yazidi minority.”

A ferocious religious apartheid has risen up in Africa, and with it a new Islamic imperialism. The South African government should be offering the government of Nigeria the full assistance of a liberated South Africa.

If that is not something South Africans should recognise, what is?