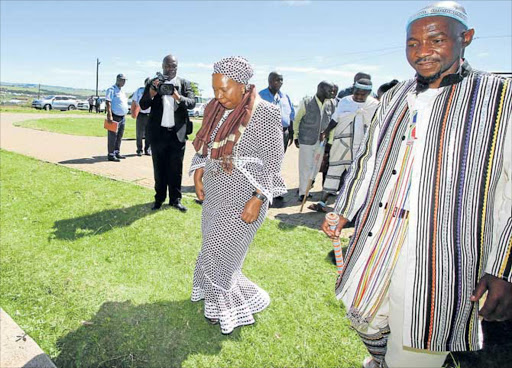 Nkosazana Dlamini-Zuma visiting Xhosa king Mpendulo Sigcawu at his Nqadu Great Place in Willowvale Picture: LULAMILE FENI
Your Majesty. Please indulge me once more to be so bold as to speak to you as my king about your widely-publicised comments that South Africa is not ready for a woman president, though I am nothing but dust and ashes in your court.

Media reports inform the nation that, during the visit of ANC’s Nkosazana Dlamini-Zuma at our home in Nqadu Great Place, you said: “The country is not ready for a woman president because even our democratic presidents which are all men have not accomplished their mission of turning it around”.

The same reports inform further that you said of Dlamini-Zuma: “I am not sure of her capabilities for the presidency. Sending her to the presidency would be just a disaster because our country is in a mess”.

Your remarks have put the health of our democracy in danger. I say so because areas under your jurisdiction, and the whole of South Africa, can benefit enormously from exemplary affirming words from you to any citizens of this country who make themselves available for election for whatever reason.

Here, in the province of the Eastern Cape, we have no reason to harbour reservations when it comes to a female president. Over the past 15 years we had the privilege of being served by two female premiers and several female mayors.

We also had the privilege, like all South Africans, of being successfully served by female leaders in all spheres of government and in all three branches of government. Their individual and collective records of achievements leave no doubt that we are all better persons today, and ready for a female president. our Majesty, even without your utterances, restrictions on political freedom and a shortage of leaders with integrity are among the risks that continue to face South Africa today.

Integrity in all but its natural state is a “tradable good”, meaning that once the collusion between politicians with integrity and the gushing water of factionalism and clandestine financial interests commence, there will be no turning the tap off.

Negative utterances of this sort are very expensive because they undermine aspiring candidates and militate against the founding values of our democracy. They also pose a risk of submitting our democracy to the control by a few who are more interested in amassing personal fortunes than promoting human rights. This risk must be avoided at all costs.

I say your comments put our democracy in danger – especially in so far as they militate against the core values upon which a democratic South Africa is founded.

It is not a place of a king to say who should stand for public office or to imply who ordinary South Africans should vote for. That is a fundamental right of individual citizens.

Traditional leaders, like all other leaders in our society, must recognise the expressive value in candidacy – whether in political party internal elections or in elections for legislative bodies in government – noting the importance of giving female candidates the opportunity to participate in the competition of ideas and governmental policies, which is the core of our electoral process.

This linkage resonated more generally with witnessing the freedom of expression in action as it highlights that the right to free speech serves not only the speaker’s interest, but also separately concerned the interest of the audience in hearing what is being said in order to make informed political choices.

The right of female South Africans to stand for public office is similar to the right of free expression which serves to protect the interest of those who have it and who may wish to use it to express their views.

When aspiring female candidates stand for public office, they add value to our democracy by broadening the choice of available candidates.

This is in the same way as free expression serves all those who have an interest in acquiring information from others.

Everyone who lives in a democracy is affected by the fact that this is a society enjoying a broad range of quality candidates and a free exchange of information.

A place of a king to is to affirm that the right to stand for public office, otherwise referred to as the right to candidacy, is guaranteed in the constitution and a number of pieces of enabling legislation. It is often expressed alongside the closely related right to vote.

A king must welcome with open arms all aspiring political candidates who visit his area of jurisdiction and explain to locals that the constitution provides that every adult citizen has the right – to vote in elections for any legislative body established in terms of the constitution, and to do so in secret.

They also have the right to stand for public office and, if elected, to hold office. The constitution explicitly endorses the principle that “every citizen”, who is qualified to vote for the National Assembly is eligible to be a member of the assembly and therefore to become the president of the country.

No king must ignore that the right to stand for public office and the right to vote represent the core rights aimed at establishing popular sovereignty and emphasise the direct link between eligible voters, candidates standing for office, and democratically elected legislatures.

If a representative government is truly to fulfil the ideal of democracy, it must be legitimate and based on popular consent, in the sense that the right to stand for public office and the right to vote are understood to be general, equal, direct and secret.

I address you in the same manner I would had I been physically present at the court to perform royal duties. I am born of the Gubevu clan in the Ndabakazi area of Butterworth.

The fields my family plough and harvest crops from overlook the grave of King Phalo. Some of my household livestock graze near Bawa Falls, on the same pastures where Kings Gcaleka and Rharhabe acquired tutelage that made them great fathers to amaXhosa. Aaah Zwelonke!