Drawing the very fine line between church and state 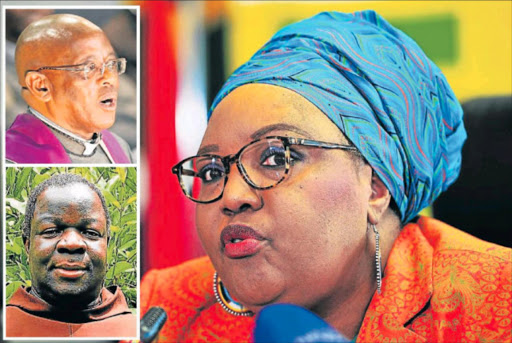 Screen Shot 2017-09-30 at 11.26.26 AM
A loud bellow of protest is emanating from across the broader Eastern Cape church and echoing nationally against proposals by the state’s religious commission to regulate all religious entities.

The commission’s recommendations include passing new laws that will make it compulsory for every religious organisation to register with the state and for every individual religious practitioner to be registered.

The proposals are contained in the final report of the Commission for the Promotion and Protection of the Rights of Cultural‚ Religious and Linguistic Communities (CRL).

This week a powerful lobby of well-recognised national and Eastern Cape church leaders took action, petitioning the ANC chief whip in parliament, Jackson Mthembu, for the ANC to reject the CLR report.

They claim these amount to a violation of the constitution’s right to freedom of religion.

A copy of the petition has also been sent to the ANC secretary-general Gwede Mantashe.

Should the recommendations by the CLR be promulgated, the faith-based sector says they will approach the Constitutional Court to protect their religious freedoms.

They also predict an uproar.

The petition was drawn up by Dr James Crompton of the Word of Faith Christian Centre, which oversees 20 churches in Nelson Mandela Bay Metro.

The commission was appointed late in 2015 to investigate the “commercialisation of religion and abuse of people’s belief systems”.

This followed a spate of bizarre incidents, mostly involving independent churches, where congregants were urged to eat grass or drink petrol, and in one case a leader infamously sprayed doom into the faces of believers.

In its final report presented to parliament on June 27 the CRL chair Thoko Mkhwanazi-Xaluva claimed the commission had broad-based support from religious bodies.

However, organisations representing millions of mainstream Christian churches – including 3.8 million Catholics – say this is completely untrue.

And they accuse the CRL of disregarding submissions from 200 different faith-based organisations, and further, of making final recommendations that cross the line that separates the church and the state and prevents government from interfering in matters of faith and doctrinal issues.

The Cogta parliamentary portfolio committee was due to hear appeals from the religious fraternity earlier this month, but the matter has been delayed to the last quarter of the year.

CRL chairperson Thoko Mkhwanazi-Xaluva says poor and desperate people are being “hooked and fed all kinds of things” and that the commission is attempting to protect them.

She also says the constitution makes provision for everyone to choose a trade‚ including being a religious leader‚ and for the practice of a trade or occupation to be regulated by law.

Her commission has however, come in for criticism from the outset, including from the ANC itself.

Writing on the ANC Eastern Cape website soon after the commission began its work, the Reverend Dr Vukile Mehana, the national coordinator of the ANC chaplaincy, criticised the CRL for their “heavy-handed” modus operandi.

“The issuing of summonses to a number faith-based organisations to appear before the CRL had given rise to regrettable perceptions that government was attempting to regulate religious practice and expressions of faith,” he said.

As a result the national Chaplaincy had “found it necessary to state unequivocally that the ANC is of the view that the issuing of summonses against religious communities displays a heavy-handed, misguided approach”.

He went further to condemn the CRL for its blanket approach.

“While there have been isolated incidences of abuse in the religious sector, the commission has chosen to paint all faith-based organisations with the same brush. Instead of zooming in on the excesses and dealing with them directly, it has chosen a path of confrontation that ... will lead to the perception that the ANC-led government is trying to usher in state regulation of churches by stealth.”

Mehana concluded by warning: “The national Chaplaincy of the ANC has always been conscious that as we lead the people of God – the churches must be our conscience. As things are happening now, we could get to a point where the envisaged relationship between the church and the state is jeopardised, and the church will not be able to play its rightful role as the prophetic voice and the conscience of the nation.

“You cannot have a church that is state regulated in terms of its prophetic function. Once you do that you’ll have a state church. Then you become prophets of the palace. There has never been any independent voice that emanates from a prophet of the palace.”

The petition issued to the Chief Whip this week echoes similar concerns. While it concedes that there are “charlatans” operating on the fringe of the religious fraternity, it says there is “no need to control people’s freedom of worship so long as they operate inside our existing legal framework”.

It further says the CRL has used “these scoundrels as an excuse to propose additional laws which were irrelevant, totalitarian and oppressive. The proposed laws will severely impinge on the rights of law- abiding citizens of this country and will have no apparent effect on the lawless.”

Responding to the CRL Dr Peter Hammond, founder of the South African missionary organisation Frontline Fellowship, has also warned against the danger of the state regulating religion: “If we do not learn from history then we will suffer consequences. Regulating religion has a very disturbing history. The establishment of the Council for the Affairs of Religions and Cults in the Soviet Union (later the Council for Religious Affairs) led to the closing down of 49000 churches and the execution of over 200000 ministers by the Cheka, NKVD and KGB in Russia.

“Unregistered churches, including over 10000 house churches in Cuba, have been closed and many thousands of Christian leaders arrested under their secular state. In 2015 over 2000 churches linked to the legally recognised Assemblies of God denomination were declared illegal by the Cuban government.

“In Red China arrests, raids and demolitions of churches that are considered unregistered are taking place to this day.”

Pastor Afrika Mhlophe says that determining issues relating to doctrine can never be a function of the state. “Faith is a personal and highly selective belief system which does not operate within a legal framework or according to science.

“So if there is to be regulation, the fundamental problem is who gets to decide? If we say the state gets to decide and to involve itself in doctrinal issues there is obviously a contradiction.

“And the church is understandably nervous since the government has already been seen to impinge on certain Biblical principles, such as parents disciplining their own children,” he said.

He also pointed out the issue of religious freedom was enormously broad and has already been tested in court. Former Judge Sandile Ngcobo ruled that “believers should not be put to the proof of their beliefs or faith. For this reason, it is undesirable for courts to enter into the debate whether a particular practice is central to a religion unless there is a genuine dispute as to the centrality of the practice”.

If that was the case for the courts, then surely more so for the state, said Mhlophe. However, he conceded that the church needed to take some responsibility for the abuses that have taken place under the banner of the Christian faith.

“These have mostly happened at independent churches, where there is no accountability to anyone,” he said, noting that the senior pastor of Bhisho Community Church, Mangaliso Matshobane, had recently set up a self-regulating body for this purpose. Matshobane could not be reached for comment yesterday.

Dawn Barkhuizen is a Dispatch journalist