‘‘ ’’ The fine line between fascism and democracy 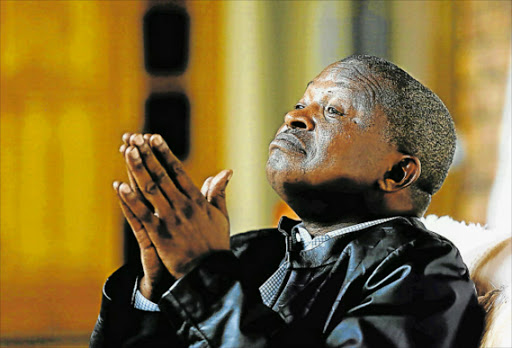 There needs to be an independent judicial inquiry to decide whether threats of violence in Mpumalanga by armed and uniformed members of Umkhonto we Sizwe Military Veterans Association (MKMVA) – as headed by deputy minister of defence and military veterans, Kebby Maphatsoe – did or did not play a significant role in providing delegates to the ANC elective conference in Soweto.

Magashule as ANC secretary- general is now one of the most powerful people in South Africa, especially if – as expected – he is supported by Mabuza.

What happened in Mpumalanga is crucial for the whole country. With only 4.04 million people according to the 2011 census (by comparison with 12.27 million in Gauteng), the province nevertheless was kingmaker in providing nearly one and a half times as many delegates as Gauteng to the ANC conference.

This means that video evidence of what is alleged to have taken place in Mpumalanga in the lead-up to the elective conference has vital, national importance.

The matter cannot be left to ANC itself to sort out. There is a national, public issue here that could potentially involve arrests and prosecution on the grounds of illegal and unconstitutional behaviour.

This evidence is available online and can be seen by anyone across the whole of South Africa – indeed, across the world. I urge readers please to see for themselves – it’s on eNCA (November 7) titled: WATCH: Video emerges of MKMVA members enforcing ‘unity’ campaign.

The video begins with an interview by journalist Xoli Mngambi with the former underground MK commander, subsequent premier of Mpumalanga and ANC treasurer- general Mathews Phosa, who stood initially as one of seven candidates for election as ANC president, before retiring from the campaign.

It states: “A chilling video of ANC members firing guns recklessly in a crowded area has surfaced.

“In the video, a man in a black coat reaches into his pocket.

“Two individuals follow suit, firing multiple shots in the air, while a number of people, including children, stand nearby.”

What is not stated here is that this video shows “MKMVA members enforcing ‘unity’ campaign”, as the title of the eNCA video of December 7 makes clear. The group shown “firing multiple shots in the air” are in MKMVA uniform.

The article then quotes Phosa: “That video was shot after some of the branch general meetings recently,” says Phosa. “They’ve been used to intimidate people.”

Phosa then “says the gunmen are not only ANC members but are directly linked to the Mpumalanga ANC chairperson. ”.

Phosa then clearly states: “There are quite a number of comrades I recognise there from Nelspruit, from Barberton. And when we discuss with comrades, they’ve been used in branch general meetings to disrupt BGMs which were not in the favour of either Mr Unity or comrade DD (Mabuza). They are there, they are the private army, they are a disruptive private army.”

The article then notes that: “Mpumalanga has seen its fair share of political assassinations in the past few years”.

It continues: “Mpumalanga is another killing field, it’s not only Kwa-Zulu-Natal,” says Phosa.

“People are dead, breadwinners are dead. Now you see these guns being wielded, you ask yourself where is the arrogance coming from, of wielding arms? Even if they were legal arms, do you go drunk and shoot in the air, in a province that is riddled with corruption and murders, assassinations, poisoning?

“It’s scary. That is why I am saying I think the police should look at this.” Later the same day (December 12), eNCA published a further article headed: “Mpumalanga court case averted?”

It reports that in a private meeting with top-level ANC officials the same day, Phosa had “reached an agreement with the party’s national office”. Phosa and the ANC leadership – no names given – had “resolved that disputes in Mpumalanga would be dealt with, out of court and ahead of the elective conference”, after Phosa had previously “approached the courts to have Mpumalanga’s nomination process declared null and void”.

The article then continues: “The ANC agreed that Phosa’s branches were affected in Mpumalanga as a result of intimidation by David Mabuza’s so-called ‘goons’.”

Phosa had a specific and limited issue in contention with ANC’s “national office”, which he resolved with them in private. It related only to delegates who supported his own candidacy for the post of ANC president.

As he told eNCA, “I’ve got 408 delegates, which is higher than any one of the candidates. What happened to them?…so that’s part of the problem, what happened to my 408 delegates? What have I lost? I’m leading in that province. So we want those delegates to be legalised properly.”

Irrespective of this specific issue, which Phosa resolved in private with Luthuli House before he abandoned his legal action, there is a far greater and more fundamental issue for South Africans, which Phosa side-stepped.

Under South Africa’s democratic Constitution, the ANC is a private body like any other political party, or any football club, or private company. It does not “legalise” anything – only the National Assembly does, provided its legislation accords with the Constitution.

What Phosa, to his credit, has revealed is a massive, systemic crime in Mpumalanga, in which private citizens – ordinary black people – have been intimidated on a huge scale, and some even murdered.

In South Africa’s parliamentary and constitutional democracy, this is a matter for the police, the National Prosecuting Authority and the courts. For this to be conducted according to law is the most important issue for the whole society, especially when this ongoing, systemic crime is directed towards control over a political party, the ANC, and thus potentially control of the state. Why have the police and NPA taken no action?

In Phosa’s own description, a “private army” under the command of a government minister has been permitted to behave towards some of the poorest citizens in the country as if it were Adolf Hitler’s stormtroopers.

What we are discussing here is the difference between democracy and fascism.

This is a matter for all the citizens of South Africa.

Paul Trewhela edited the underground journal of MK, Freedom Fighter, during the Rivonia Trial. He was a political prisoner in Pretoria and the Johannesburg Fort in the 1960s.