Real solutions to GBV continue to elude nation in mourning 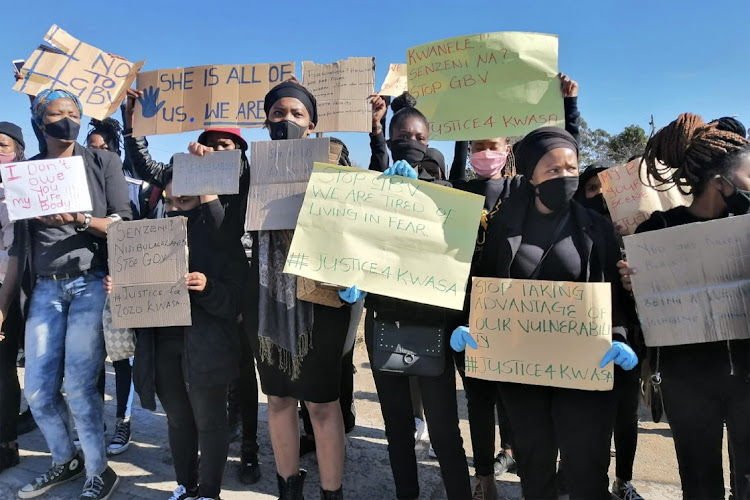 More than a thousand people march on the streets of Dutywa and to the magistrate's court to demand that the man who brutally killed student Asithandile Zozo is not granted bail.
Image: LULAMILE FENI

On the August 23, Asithandile “Kwasa” Zozo, who was pretty much a daughter to me, was laid to rest. Her life was cut short at a young age in a senseless act of violence committed by what can only be described as a deranged young man.

Crimes of gender-based violence (GBV) are drowning our country in the blood of innocents. Whether we curl into a ball of pain or lash out in anger at this horrible crime, the child is gone.

'Come to us, we will protect you': KZN taxi drivers take a stand against GBV

KwaZulu-Natal taxi drivers are taking a stand against gender-based violence and appealing to women to seek their protection should they ever be in ...
News
8 months ago

It has become clear that the state, often projected as all-powerful by the politicians who feed off it, does not know how to deal with this issue.

Similarly, the rest of society seems lost, helpless and frustrated by the ongoing bloodbath.

In the short term, it seems law enforcement could do more to arrest and prosecute perpetrators. However, in the long term, we have yet to fully decipher the root causes of the mental instability that leads to the heinous acts of GBV.

By all indications, we are still some way off from the real solutions.

Though we are a nation in mourning, we have to push on. We have to uproot the very causes of violence in our society.

We have to reverse what seems like a tidal wave of violence and depravity which is threatening to sweep this nation away. We must keep from tiring or falling into despair.

The deputy minister of social development said women who have had mastectomies and cervical cancer are victimised and are considered “less than” or ...
News
8 months ago

Rather, we must keep fighting because we are literally fighting for the soul of this nation. As our prisons fill up with desperate and violent citizens, killers of men, women, and children, we must ask ourselves why the value of human life seems to have fallen so far.

An important contribution in this fight was made by Amber Peterman, Shalini Roy, and Meghna Ranganathan in their 2019 article, How is economic security linked to gender-based violence? New insights from the Sexual Violence Research Initiative Forum 2019.

While some people may argue that SA is not officially identified as a conflict area, the truth is SA has a high murder rate comparable to conflict areas.

While SA has an affluent economic stratum, it is largely poor. This translates into a country that can be classified as economically insecure, with citizens largely exposed to high levels of acute stress.

It is well documented that SA also exhibits a widespread use of risky coping strategies such as alcohol and drug abuse. This makes the high incidence of GBV unsurprising under these circumstances.

It is, therefore, reasonable to assume that a positive impact on the economy can result in a meaningful reduction in GBV and other forms of violence.

While we can look at the circumstance of Asithandile’s murder notwithstanding the excruciating pain of such an exercise, this effort covers too narrow an area to have a sizeable impact in our society.

South Africa remembers Uyinene one year later: ‘We are on our knees. Still we bleed’

One year ago, University of Cape Town student Uyinene Mrwetyana was raped and murdered by Luyanda Botha in the Clarenreich Post Office in Claremont, ...
News
8 months ago

Asithandile’s killer will surely be held to account for his actions. . However, this will not bring Asithandile back, nor will it guarantee that no female will be killed by a so-called lover or ex-lover again.

This demands a committed national effort to build a robust and inclusive economy, built to involve men and women as equally valuable partners. This in turn requires a realignment of the social roles played by men and women. We need to move away from the roles where men play benefactors and women beneficiaries, as often seen in traditional social order.

However, instead of a reversal of roles, often seen in modern society, what is required is a far more co-operative approach to all human activity.

Ultimately the most powerful among us must use power to unleash power among the least powerful. Obviously, the ruling party doesn’t understand this.

Perhaps, if we do instead, Asithandile’s life will pave a way towards a better, more inclusive and co-operative society.