ANC president Cyril Ramaphosa has written to fellow ANC members, pointing out that when it comes to corruption, the party stands as the No 1 accused.
Image: SUNDAY TIMES/ ESA ALEXANDER

“The elite who took power after 1994 did not own productive assets, so their consumption has been financed through state revenues. Broadly speaking, this is what has happened throughout much of sub-Saharan Africa: the use of state revenues to finance the private consumption of elites means ever-increasing direct and indirect taxes.”

This is an excerpt from Moeletsi Mbeki and Nobantu Mbeki’s book, A Manifesto for Social Change: How to Save South Africa. In the book, the authors expose the role played by the politically connected elites who positioned themselves as intermediaries between the state and business. 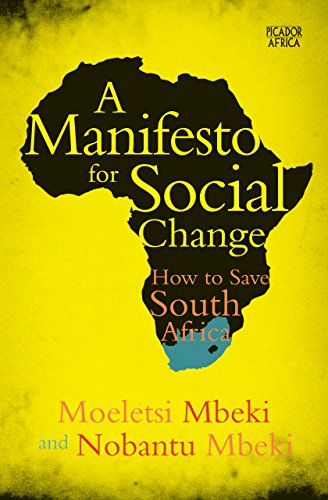 A Manifesto for Social Change: How to Save South Africa

Because of this poor choice, the politically connected elites not only put SA in harm, they missed huge opportunities to create a truly modern economy. As a result, the SA economy holds pretty much the same structure and shape it took under British colonial rule hundreds of years ago.

Our natural resources have grown and sustained western economies for centuries, feeding them raw materials and revenues in exchange for finished products, technology, and skills.

The tragic result has been the lockout of the majority of South Africans from the formal economy, robbing the country of untold talent and wasting vast human potential. The overwhelming violence which is drowning SA today, is a measure of the violence committed towards this society by successive regimes over centuries. However, perhaps the greatest betrayal is the failure of the democratic state, with all its promise, to build a truly new society, with a redesigned and realigned economy and its supporting culture.

Elite cops arrested for corruption, extortion and kidnapping in Durban

Three police officers from the National Intervention Unit (NIU) - one of SAPS' elite units -  have been arrested for corruption, extortion and ...
News
1 year ago

“As the inheritors of the legacy of Luthuli, Tambo, and Mandela, we must be honest with our people and ourselves. We must acknowledge that our movement, the ANC, has been and remains deeply implicated in SA’s corruption problem. We have to be sensitive to the concerns of our people about our role as a movement in corrupt activities.”

Perhaps in a moment of clarity, Cyril Ramaphosa laid out the true state of the ruling party in a letter to his fellow political elites. He pointed out the glaring hypocrisy of the ruling party in its often publicised commitments to eradicating corruption. The corruption surrounding the Covid-19 pandemic, occurring at a time of death and despair, has exposed the political elite as truly heartless. The investigations into the corruption of “state capture” have not even been completed, but the vultures of corruption descended on valuable state resources as if descending on rotting carcasses.

“Today, the ANC and its leaders stand accused of corruption. The ANC may not stand alone in the dock, but it does stand as accused No 1. This is the stark reality that we must now confront,” Ramaphosa wrote.

However, Ramaphosa’s brave words are empty without action. Considering the concerted attempts by his detractors within the ANC and their vocal attacks on him, he must act swiftly.

The moral poverty that has marinated the ANC in the past decade has all but drowned the country in poverty, violence, and despair. As if describing the exact depravity and the callousness of the so-called ANC leaders who are fighting back against the battle against corruption, Moeletsi, and Nobantu write: “More importantly, this new elite has caused a convergence not in objectives but rather in means of achieving given ends, namely corruption. Their existence presents a source of intractable instability that has accelerated a fracturing society both because the elite are unpredictable and act haphazardly and operate without circumscription.”

If we do not get rid of corruption and realign our economy to serve all the people of SA, we will be doomed by an elite committed to no vision besides achieving nefarious ends.

We can no longer willingly live in a “fracturing society” which kills its citizens through poverty, gender-based violence, police brutality, crime, murder, and corruption. The instability inherent in the current atmosphere is costing our economy the potential investments required to grow it. Yet, a growing restructured economy is our only chance to heal the brokenness which is so evident in South African society.