With no one taking responsibility residents are left in the lurch 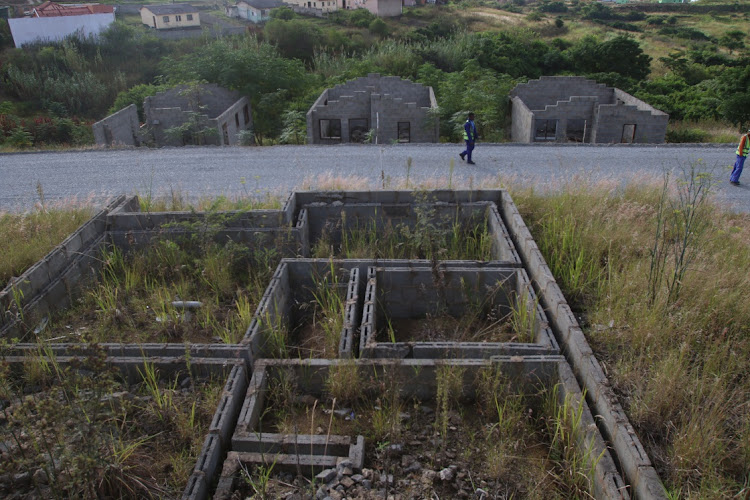 One of abandoned housing projects in Mdantsane NU8 the project began in 2015 where two sites were chosen for these RDP homes, in one of them only foundations were dug before the Contractor ran away.
Image: MICHAEL PINYANA

Bhongolethu in isiXhosa means “our pride” but for the residents of an Eastern Cape township with the same name, there is very little to be proud of.

In 2005, work was completed on a multimillion-rand project to build 700 RDP houses for a new settlement in Cacadu (formerly Lady Frere) in the Emalahleni municipality. The settlement was named Bhongolethu. Hundreds of families would finally have a home to call their own.

However, the project suffered the same fate as so many others in the Eastern Cape before it: millions paid to contractor for a second-rate job; with even more being spent on trying to fix the shoddily-built homes.

Instead of a thriving new community, all that stands today are hundreds of structures of varying degrees of completion — or collapse.

The South African Human Rights Commission (SAHRC) is set to assess whether the Buffalo City Metro (BCM) was in violation of human rights related ...
News
3 weeks ago

A visit to the area makes it clear that the Bhongolethu development has failed to live up to its name. Some residents, who described the area as resembling that of a ghost town, use rocks to keep their roofs from blowing off; the walls of some structures have caved in.

The Dispatch attempted to get answers from the local municipality and the provincial human settlements department not only about what went wrong, but how government intended remedying the situation.

However, the buck was passed from municipality to the province and back again. Emalahleni said the provincial department was meant to appoint a new service provider while the department says the project is the responsibility of the municipality.

It is evident that the two spheres of government are not communicating effectively while residents are the ones caught in the middle and forced to make the best of a bad situation.

Kouga municipality turns to court to have land invaders removed

A piece of land bought by the Kouga Local Municipality for R3.4m and earmarked for social development has been brought into the spotlight with an ...
News
2 weeks ago

In a separate housing debacle, the DA last week called on the SA Human Rights Commission to assess whether or not BCM was in violation of human rights because of an incomplete housing project. The party said residents had been forced to live in appalling conditions due to the stagnant project.

The sad reality is that there are many Bhongolethus in the province; where projects are either delayed or millions are flushed down the drain because the contractors simply did not have the necessary skills for the job they were hired to do. The right to adequate housing is one enshrined in the constitution but if government does not confront these challenges that continue to persist, this goal will never be achieved.