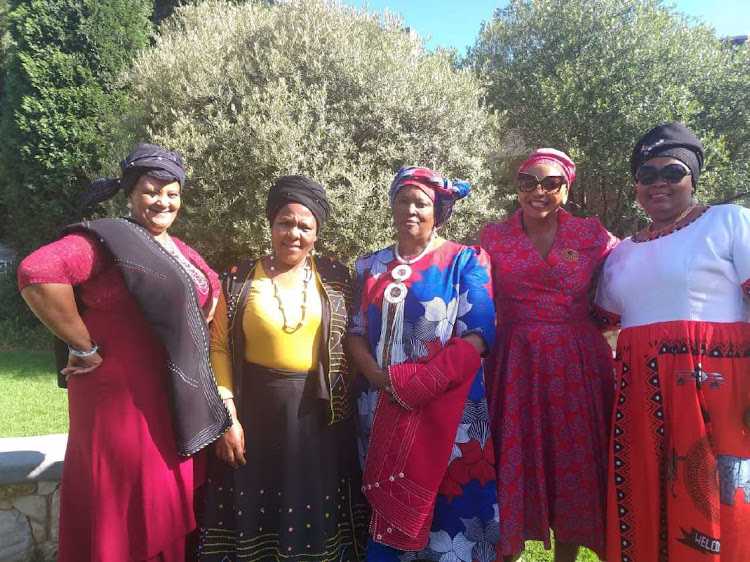 Women have played a key role in shaping the history of many African nations. From left, Nkosi Nosandi Mahlaului Nosandi Mhlauli, the late Nkosi Nonyaniso Fikeni, Nkosi Makheswa Nonkonyana, Nkosi Nosintu Gwebindlala and Nkosi Nosizwe Mhlambiso have all at some point served in various capacities of traditional leadership in the Eastern Cape
Image: SUPPLIED

There existed, even in precolonial societies, a culturally built hierarchy between men and women, but one which was regulated by traditional checks and balances to impede abuse of power by those in positions of authority. And this ensured that they ruled by popular mandate.

The weakening of this traditional democracy by colonial influence tipped the scale in favour of autocratic rule by the kings as a result of illegitimate governmental interference on how historically traditional leadership operated.

Traditional leadership became a   space highly contested and tenuous   for males to participate in as the role and status of women increasingly became delineated to child-rearing and issues related to the making of a home, with them having no real voice in political and governance matters.

By no means is it suggested here that the nurturing aspect of women be diminished, but rather it is highlighted, because  society has tended to use it as the stereotypical and sole identity and role given to women.

There is no gainsaying the obvious that women, despite these imposed limitations, have continued to play leadership roles in the development and liberation of various African societies.  One such woman is Nonesi, the Great Wife of the 19th century AbaThembu King Ngubengcuka Vusani kaNdaba, whose first ascension to regency came under precarious circumstances.

Long road for SA before women are safe — Ramaphosa

President Cyril Ramaphosa has admitted there is a long way to go in ensuring a safe and equal society for women. Delivering his Women’s Day ...
News
2 months ago

When the queen took up regency, unconscious institutional mindsets about leadership based on gender biases and stereotyping were rife. This may have led to her appearing timid in dealing sternly with her people, as some in her clan had never fully accepted her as regent and went to join Maphasa in the 1850 War of Mlanjeni.

Fully aware that she had no absolute power over her people precisely because of these biases, and the fact that her appointment had not followed the traditionally accepted route, which in any case would have selected a male regent, she needed to cajole her people into following her lead.

The masculinisation of the leader role, then and now, makes women less effective when appointed into top positions, as they are less likely to receive the necessary support and respect of those they lead because they are in a role considered incongruent with femininity.

Furthermore, many people, then and now, associated leadership with behaviours with stereotypical masculine traits such as aggression, dominance, competitiveness, independence and self-reliance; traits the queen may have seemed to be devoid of in her role as regent.

Even so, she was decisive enough to restrain her people from taking part in cattle killing when this particular prophecy spread like wildfire.  Had she allowed them to participate they would have been plunged into economic disarray, intensifying their dependence on the Cape government not only for military protection, but for survival as well.

It is disheartening that, in an era where women are now the economic backbone of many homes and communities, they are still faced with the unconscious biases Queen Nonesi was faced with. In being breadwinners in many homes in SA, women are still expected to be the primary caregivers as well, something that is not expected of their male counterparts.

Women are under attack in the Eastern Cape. With 1,603 women murdered mostly by blade or bullet since 2018 and only 86 murderers convicted, the ...
News
2 months ago

We also notice that when women ascend to positions of authority, it is immediately assumed it is because of their proximity to men of influence; their competence and skill are considered secondary. It is also disheartening that they still face forms of resistance and lack of support from their male counterparts because of these hidden reflexive leader preferences. This  causes many  women to shy away from upward career advancement that will require them to occupy positions perceived to be best suited for men.

Perhaps we stand to learn from the queen that what had seemed like timidity may have, in the long run, been used as a strategic tool to protect her people. The continued alliance which was initiated by her late husband, with the colonial government may have at the time best served the interest of the Thembu people, who would have been snuffed out had they openly opposed a government which was clearly militarily stronger than them. The relationship had glaring shortfalls, but for a time it did allow AbaThembu some semblance of independence.

The beauty of life is that people can reinvent themselves. Once touted as “the faithful” who had proved her loyalty to her colonial allies, by moving with her clan to the border of the Cradock district when she began to feel the brunt of suppressive land policies that would negatively affect her people, she did not hesitate to end her long friendship with the Cape government.

In the past 18 months, most women have neglected to have important cancer screenings due to the fear of contracting the coronavirus while visiting ...
News
2 months ago

One whose appointment as a woman by the Cape government was obviously for no pure reasons and had been manipulated to limit her influence, Queen Nonesi resisted, in 1864, a persuasion by the colonial authorities to move to present-day Intsika Yethu so that their land at Emalahleni could be occupied by white farmers.

This resistance saw her being forcibly deported to her brother’s place at Nyandeni, but her work had already been accomplished as she successfully saved the land of Emalahleni for black people.

There are many other women warriors whose voices ought to be heard, like Princess Emmah Sandile of amaRharhabe and great wife to Nkosi Stokweka Ndlela. Princess Emmah became the first black woman to gain a formal education in Sub-Saharan Africa and  a deed of ownership of land in her own right, not as inheritance but as the first-generation owner.

More research on women warriors should be conducted to influence the decolonisation of our education.

The current composition of the Eastern Cape House of Traditional Leadership  is reflective of historical participation of women in positions of power.

In this Women’s Month, we learn from these remarkable women that when time comes for us to resist injustices, we should not hesitate to do so, even if the cost is great to us personally and our choices are unpopular.

When history judges the current generation, it must be said they, too, were remarkable women who never shied away from shaping their  society to be a more equal space for both men and women to coexist in.

Nkosi Langa Mavuso is acting chair of the Eastern Cape House of Traditional Leaders. He writes in his personal capacity.