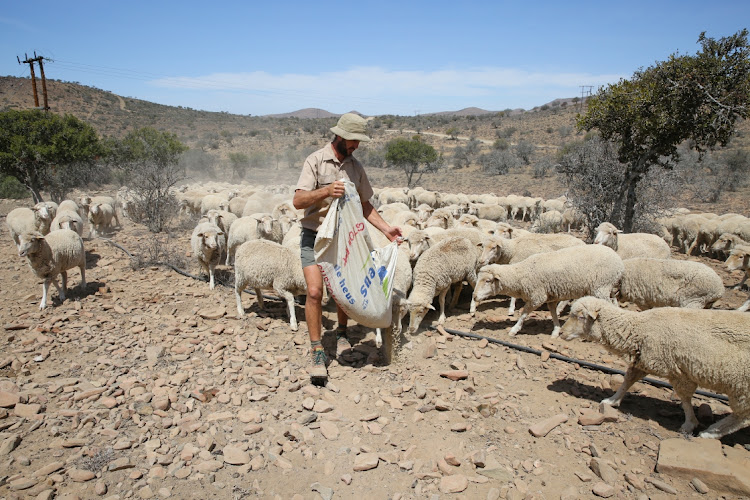 Marx Strydom from the farm Erekroon in Jansenville is dependent on feed donations to keep his stock alive.
Image: WERNER HILLS

The large harvests of 2020 improved farmers’ finances and allowed some to replace old machinery.

We witnessed tractor and combine harvester sales remaining positive, and expanding by double digits in many months from mid-2020.

Nonetheless, this is not a complete picture of the financial conditions in this sector.

The rising input costs because of higher feed prices for livestock and poultry, as well as  higher fuel, fertiliser and agrochemical costs for those in field crops and horticulture, are worth highlighting.

There’s no avoiding the reality that Southern Africa is in the throes of a climate emergency.
News
1 month ago

First, the relatively higher grain and oilseed prices in a year of a large harvests is uncommon.

But the driving factors of prices have not been the domestic supply conditions as is typically the case, but rather the rising global prices, which supported our local prices as a minor player in the global grain markets.

Globally, grain and oilseed prices have been underpinned by rising demand from China and dryness in South America, which threatened the 2020/2021 harvest for the earlier part of 2021 .

As a result of these dynamics, SA livestock and poultry producers faced higher input costs and did not enjoy the windfall other farmers experienced.

However, the “party is almost over” for horticultural and field crop farmers, not because of a fall in commodity prices, but from a surge in input costs.

These higher costs will pare the profits from the past season as many farmers embark on land preparation for the 2021/2022 production season.

Hungry neighbourhood kids are being fed from a flourishing school vegetable garden in Duncan Village.
News
1 month ago

If we consider herbicides such as glyphosate, atrazine, and metolachlor, their prices were up by 99%, 33% and 32% respectively in September, compared with the corresponding period in 2020.

The same trend persists in major fertilisers such as ammonium nitrate, urea and potassium chloride, whose prices were up by 107%, 58% and 125% respectively in September.

These overall increases are on the back of supply constraints and disruptions in production lines in major global fertiliser and agrochemical producing countries like China, India, the US, Russia and Canada.

Rising shipping costs and oil prices have also been contributing factors to these price surges, along with firmer global demand from an expanding agricultural sector.

Unfortunately, all these headwinds are beyond the farmers’ control as the price increases reflect global market conditions rather than the domestic picture.

Notably, South African imports about 80% of its annual fertiliser consumption and is a minor player globally, accounting for a mere 0.5%.

Local prices tend to be influenced by developments in the major producing and consuming countries mentioned above.

Much of the fertiliser imported by South Africa is used in maize production, accounting for 41% of total fertiliser consumption in the country, the second-largest consumer being sugar cane at 18%.

How small African farmers, who are crucial to food security, are teching up

Small growers produce more than a third of our food, but face huge hurdles which are now being addressed with tech
Africa
1 month ago

Fertiliser constitutes about 35% of grain farmers’ input costs and a substantial share in other agricultural commodities and crops.

From November 3, an additional cost to farmers will be the rising fuel prices.

The preliminary estimates from the Central Energy Fund suggest that petrol (95 ULP inland) and diesel (0.05% wholesale inland) prices could increase by 98c a litre and R1,41 cents a litre respectively in November.

This adjustment means the retail price of petrol could increase to R19,31 a litre from the current level of R18,33.

Simultaneously, the wholesale diesel price could rise to R17,12 a litre from R15,71 in October.

For context, fuel generally accounts for between 11-13% of grains and oilseeds production costs.

Fuel consumption is usually moderate throughout the year, with the highest periods being during planting and harvesting, and we are in the planting phase at the moment.

The city of Cape Town has installed a floating power generation system on one of its sewage dams to test the efficiency of such solar farms to stop ...
News
1 month ago

In terms of annual fuel usage, South Africa transports by road roughly 81% of maize, 76% of wheat and 69% of soybeans.

On average, 75% of national grains and oilseeds are transported by road.

In essence, the agricultural sector is not in an entirely flowery state.

The rising input costs for all farmers will squeeze profit margins in the 2021/2022 period.

The only saving grace for those in field crops and horticulture is if global commodity prices remain elevated as expected, though possibly lower than what was seen at the start of 2021.

All this should not be too great a concern for consumers in the near term.

Farmers are price-takers and can’t necessarily pass on these costs to consumers, especially when it comes to crop farmers.

However, the story could be slightly different for poultry and livestock markets.

Wandile Sihlobo is chief economist at the Agricultural Business Chamber of SA and Senior Fellow at Stellenbosch University’s department of agricultural economics.