There is no reason for African countries not to hold elections safely and on time, writes Dr Clayton Peel

INSIGHT | No need for excuses, polls must go on 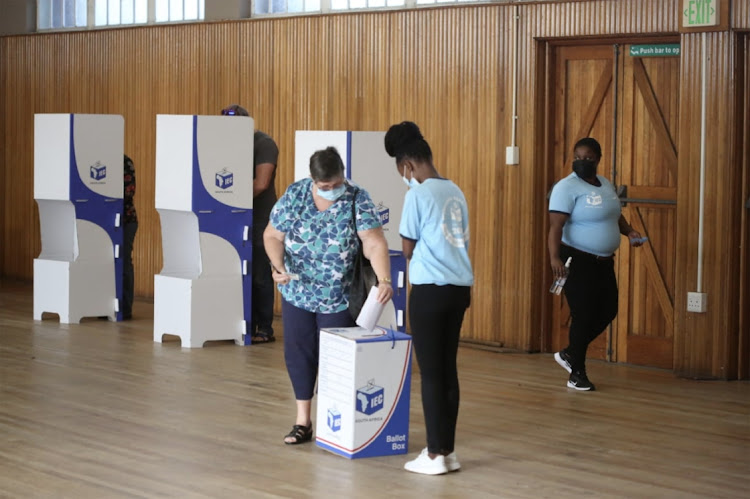 DEMOCRACY AT WORK: Electoral officers look closely as voters exercise their right to vote in Cambridge on November 1. SA has followed in the footsteps of countries such as Cape Verde and Zambia in holding elections at the time of the Covid-19 pandemic. Picture MARK ANDREWS
Image: MARK ANDREWS

Africa certainly has its democratic successes, and these must be celebrated. Even under the shadow of the Covid-19 pandemic, countries like SA on November 1, Cape Verde on October 17, Zambia on August 12, and Ethiopia on June 21, have recently forged ahead with local and national elections without suffering catastrophic surges in infections, hospitalisations or deaths.

These are the early signs of robustly safe and credible management of elections in a period of high risk, and these four countries should be lauded.

Often the focus of the media coverage is on the contests and contestants, the winners and the losers, and the ground-shifting political permutations thereof. It should be so.

It is significant that voter sentiment has unseated a president and government in Zambia, and pushed back the ANC’s  dominance in municipalities across SA.

In total the ruling party has dipped below 50%.

It is equally significant that Abiy Ahmed’s Prosperity Party won a healthy dominance in the Ethiopian parliamentary elections, and that Jose Maria Neves was voted in as the new Cabo Verdean president.

Nonetheless, it is also significant how these four case studies of democracy at work on the continent have underlined the resilience of constitutionalism and of accountability despite the Covid threat in those countries.

Even in Ethiopia, faced with an ascendant threat from armed rebels of the Tigray People’s Liberation Front on top of the Covid pandemic, the successful election exercise in June must be commended.

It was largely safe, did not result in a surge of infections, and indeed exceeded the doomsday predictions of naysayers, according to international observers and an independent academic assessment by Horn of Africa expert  Prof Jon Abbink of Lieden University in Holland.

All this should be commended, but also should be expected, and even demanded.

On the other hand, in countries like Zimbabwe, a freeze on by-elections, purportedly to prevent the spread of infections, has left pro-democracy observers worried that the government is using Covid as a guise for suspending democratic activities.

The authorities have stressed that they are acting in good faith, but independent watchers are sceptical and have taken the Zimbabwe government to court, as well as to the African Union’s Peer Review Mechanism (APRM), citing the state’s failure to hold by-elections for the nearly 40 vacant parliamentary and over 80 local government seats long after lockdown restrictions were eased.

In the APRM deposition published last month, civil society groups noted that Zimbabwe’s suspension of elections “leaves citizens in affected areas without representation and infringes upon the political rights provided for in Section 67 of the (Zimbabwe) Constitution”.

It is an interesting case with which to weigh, on one hand, the need for mitigatory measures to protect public health, with the constitutional requirements to protect democracy. Lawyers for the Zimbabwe government argued at the high court in Harare that by-elections were suspended “to save lives as the country was under threat of a new Covid-19 wave”.

However,   the judge reportedly queried why schools and universities had been allowed to open under such circumstances. In the end, the court went on to reserve judgment at the close of evidence in May, and a determination is still pending nearly six months later.

The inferences are clear. Some countries on the continent see elections as sacrosanct in upholding the legitimacy of government.

There is no limit to what such countries would do to ensure that the democratic processes proceed, at the same time ensuring that protocols are observed to keep everybody — from polling officers to voters in the queues and polling booths — safe from the risk of infection.

On the other hand, other countries whose democratic credentials are not as strong are gifted with lockdown prerogatives which they use to circumvent the requirement for such elections.

Africans must salute countries which have carefully and creatively managed elections at considerable risk at this time, and must at the same time voice their displeasure at those who use Covid as a smokescreen for repressing electoral activity.

As the APRM deposition states, Zimbabwean civic groups are of the view that the country could have proceeded with by-elections and other electoral activities, ensuring Covid-19 preventive measures are in place —   much like SA, Zambia, Ethiopia and Carbo Verde had done.

“Many countries, some with much higher infection and death rates — such as the US, Japan, South Korea, and Tanzania — have managed to conduct elections in the midst of the pandemic.

“The suspension of elections indefinitely is questionable since Covid-19 appears to have become part of everyday social life. There is no certainty if or when things might normalise again.

“Many speak of the ‘new normal’, which [Zimbabwe] should actively consider and adapt to so as to maintain democratic processes,” the deposition reads.

Surely the time has arrived for Africans to be of one mind as to the extent that public health considerations should govern the constitutional despatch of responsibilities to hold elections safely and peacefully — and on time?