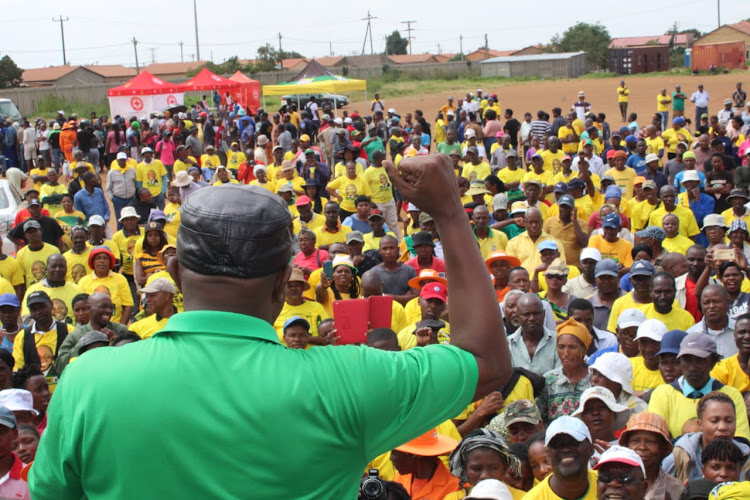 David Mabuza told party members in Daveyton, Ekurhuleni, that infighting was a disease that had infiltrated the ANC.
Image: Supplied

Mabuza was addressing party members in Daveyton, Ekurhuleni, where he was garnering support for the ANC ahead of the May 8 elections.

"Other parties that come out of the ANC are recruiting you, they came out the ANC, they will die and the ANC will live forever," he said.

Mabuza likened defending the ANC to defending the future of the country and implored party members to remain loyal to the party despite its many challenges.

"My message to you is that between us ANC members there are many fights, there is infighting for positions.

"This is a disease that has infiltrated the ANC, we will not survive it unless we remember the history of our movement. Let us not be tempted by positions because they come and go."

In a quest to convince members that the 107-year-old party is still capable of remaining "strong" despite infighting, Mabuza reminded them about the history of the ANC.

"The ANC was founded in 1912, leaders come and go. That they all come and go but the ANC shall remain. The ANC must stand stand strong and you must not stray away from the ANC," he said.

Mabuza is among 30 party members whose candidacy for parliament and provincial legislatures has been objected to by South Africans as a result of allegations relating to theft, fraud and rape.

However, he assured party members that the ANC will "throw away" unethical leaders.

"Thugs see the ANC as a place to hide. Some are hiding within us, the ANC will remove all of them, it will throw them," he added.

He implored fellow leaders to behave in a manner that shows ultimate care for the country and its citizens.