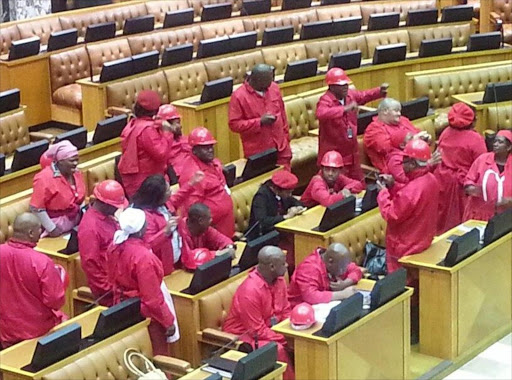 National Assembly Thandi Modise had her hands full on Thursday as the EFF delivered on its promise to disrupt President Cyril Ramaphosa's state of the nation address.

Just before 8pm, after dealing with an hour of disruptions, Modise said: "This house is suspended."

The chaos was started by EFF leader Julius Malema, who said it was a mistake for parliament to invite De Klerk.

“Speaker, we have a murderer in the house,” he said.

“We have a man who has got blood of innocent people in this house, which is supposed to represent the wills of our people — and therefore it’s incorrect for you to have extended  an invitation to De Klerk because De Klerk is a murderer.

Malema demanded that De Klerk leave the house before Ramaphosa delivered his speech.

“It is an insult for those who died and [were] tortured in Boipatong ... We please request De Klerk to please leave this house.”

“This sitting has been called for one item and one item only, to give the president ... space to deliver the state of the nation address. It is convention that all the presidents and former presidents who are still alive are invited to the sitting. Former president De Klerk has been invited because of that. I, therefore, cannot sustain the submission,” she said.

“We can't fly to Durban because of this man,” said Pambo, referring to the crisis at SAA.”

Earlier, Pambo said South Africans were without lights, in reference to the crisis at power utility Eskom.

EFF MPs called for the adjournment of the sitting.

“Please adjourn the house in order for President Cyril Ramaphosa to fire Pravin.”

Modise objected to this and ordered EFF MPs to stop disrupting proceedings.

The disruptions lasted for close to an hour.

As South Africa prepares itself for Cyril Ramaphosa's state of the nation address (Sona), we take a look at South Africa's four prominent presidents and what they achieved. Through statistics, we compare each democratically elected president's promises to the subsequent realities.