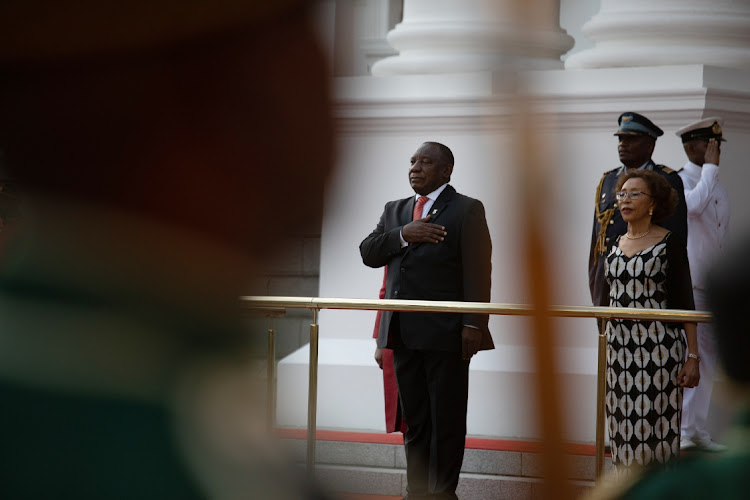 President Cyril Ramaphosa stands for the national anthem during the state of the nation ceremony in the national assembly in Cape Town. Picture: BLOOMBERG/DWAYNE SENIOR

President Cyril Ramaphosa’s state of the nation address got off to a rocky and rowdy start on Thursday evening when the EFF lived up to its promise to disrupt proceedings.

After more than an hour of disruptions by EFF MPs speaker Thandi Modise briefly suspended the sitting. When it reconvened the EFF staged a walkout.

The disruption began with EFF leader Julius Malema rising on a point of order, saying former president FW De Klerk should not be allowed in the house as he is “a murderer”.

“And therefore it is an insult to those who died [under the instruction of De Klerk] that the commander of Vlakplaas [the apartheid-era police’s special unit] ... be here. He has to leave this parliament because he does not belong here.”

De Klerk was the president of SA between 1989 and 1994 and negotiated a transition from the apartheid system to democracy and majority rule.

Modise said the joint sitting of the houses of parliament has been called for one item only, to give the president space to address the nation and it is convention for all former presidents who are alive to be invited. She ruled that De Klerk’s presence was proper and followed due process and the rules of the house. She eventually ruled that proceedings should continue.

When Ramaphosa began delivering his address, the EFF raised another point of order, this time objecting to public enterprises minister Pravin Gordhan remaining in his position. “He has caused the economy of this country to plunge into darkness,” EFF MPs said.

Modise dismissed the EFF motion, saying the joint sitting is not the time to discuss how the president appoints or fires members of the cabinet. “Members of the house have freedom of speech, but that is not unlimited,” she said.

However, EFF member continued raising points of order which eventually forced Modise to suspend the sitting, an unprecedented move.

The EFF had vowed weeks earlier to halt Ramaphosa's address as part of its campaign to get Gordhan fired.

The red berets want Gordhan, who they see as the poster child of “white monopoly capital”, sacked because of his alleged involvement in the demise of several state-owned enterprises (SOEs), not least Eskom and SAA. The party also alleges that Gordhan is on a mission to purge black professionals, and is leading the looting of parastatals amid purported moves to privatise SOEs.

During the Jacob Zuma years, interruptions by the EFF in parliament became commonplace as the party called on him to resign and to pay back the money that was used by the state to upgrade his private home in Nkandla. That strategy paid off, and it seems the party is ready to implement it to drive Gordhan out of office.