On Monday, Helen Zille quit her public Twitter account, with a 1.4m following, after what she called the “grotesque treatment” of her granddaughter on the platform.

In a seven-part thread, Zille denounced the platform as a place where trolls were given a voice, mob-lynching took place and freedom of speech was curtailed.

She said she would have a private account, where she would accept people who were interested in rational debates.

So, who has she accepted?

At the time of publishing this article, Zille had accepted 172 followers. Among them are DA members and former Olympic swimmer Roland Schoeman.

Her new profile, @ZilleTweets, features an image of a troll. 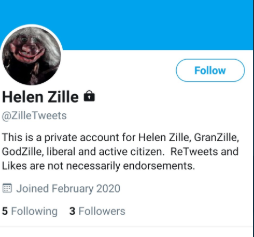 She has tweeted twice, saying it's a “relief not to have to deal with 900,00 fakes”. Of her profile picture she said: “My only way of showing what I think of trolls.”

DA Federal Council Chairperson Helen Zille has vowed to leave Twitter, which she called an “evil platform” over what she called “the grotesque ...
News
2 years ago