'We do not speak to the devil': EFF KZN as it protests outside US consulate 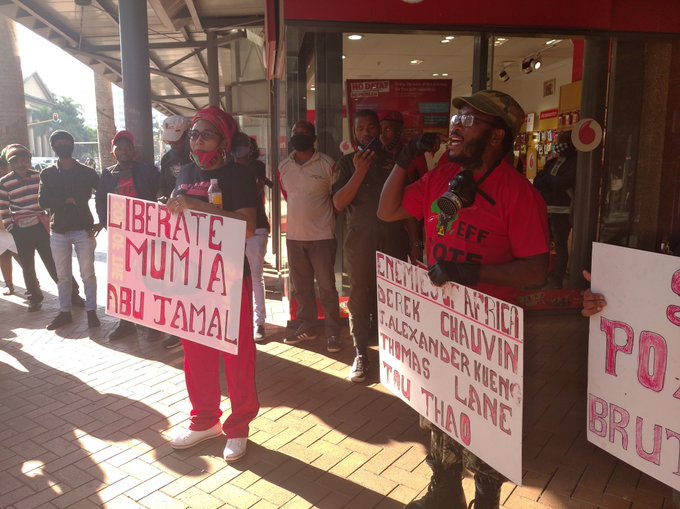 EFF members picket outside the US consulate in Durban's city centre in solidarity with the #BlackLivesMatter protests around the world after George Floyd's death.
Image: Zimasa Matiwane

EFF KwaZulu-Natal chairperson Vusi Khoza has likened the US to a “devil”, and indicated that the party did not bring a memorandum of demands to the US because they do not “speak to the devil”.

On Monday the party joined global solidarity protests in support of the #BlackLivesMatter movement and picketed outside the US consulate in the Durban city centre. However, there was no written message to be received by officials there.

EFF leader Julius Malema led a peaceful protest outside the US embassy in Pretoria, while Floyd Shivambu and supporters showed their solidarity against racism and white supremacy in Sandton.

“We did not come here to deliver a memorandum. We don’t talk to devils. What we decided to do is to pay this devil a courtesy visit to say we are aware that in America, black life does not matter,” Khoza said.

#BlackLivesMatter EFF KZN chair Vusi Khoza's has a message for racists here at home.
"Their racism is not going to be tolerated." @TimesLIVE pic.twitter.com/MropS5P3BA

The #BlackLivesMatter protests started in the US two weeks ago after the killing of a black man, George Floyd, by a white police officer.

The protests quickly spread throughout the US and around the world as solidarity protests were held.

EFF members knelt outside the US embassy for  8 minutes and 46 seconds, which is the amount of time that Derek Chauvin, the ex-Minneapolis officer, pressed his knee on Floyd's neck until he was unresponsive.

“That racist cop knelt on George Floyd until he passed on. We want to remind them that as an organisation formed to fight for the liberation of a black child, we saw it as our duty to come here to demonstrate.

“Because of imperialism and racism, we have had enough. We cannot breathe but we are not going to die like that. We will fight back. If somebody must die, it will not be one of us,” said Khoza.

He said racism in South Africa will also not be tolerated.

“We send a very clear message to the racists here at home  to say their racism is not going to be tolerated. We are going to fight back and we are going to fight racism. Anybody who displays any signs of racism, be it in factories, private spaces, public, we will take them on,” Khoza said.