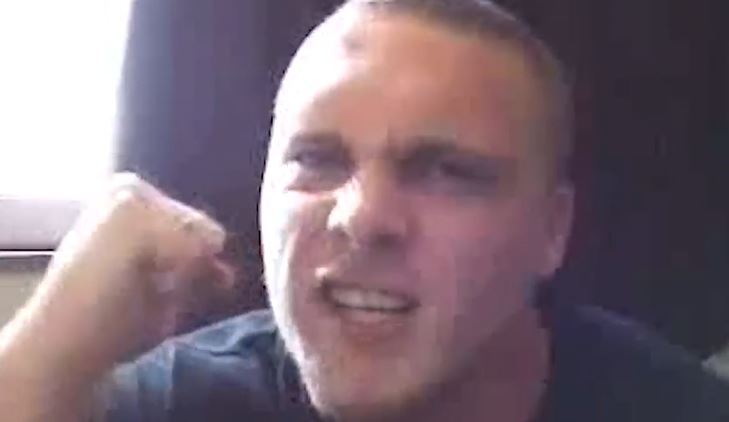 A screengrab from a YouTube video made before the 2009 elections of the now Nelson Mandela Bay Ward 2 councillor Renaldo Gouws, which has recently resurfaced.
Image: Supplied

Outspoken YouTuber and DA councillor Renaldo Gouws is again embroiled in a social media row after snippets of a past tirade have resurfaced.

The Nelson Mandela Bay Ward 2 councillor has been accused of racism after videos created in 2008 and 2009 — that have since been erased from his YouTube account — show his reaction to the Kill the Boer song used by EFF leader Julius Malema and his party.

Gouws said he regretted “some of the colourful language” he used, but said he has matured a lot since then and now realised that debate — rather than angry ranting — was a better way to get his point across.

But social media experts agree that he was walking a fine line by juggling his YouTube career with his work as a representative of a political party.

Gouws has garnered 83,600 subscribers in 10 years of giving his sarcastic opinion on politicians and political matters. His video on the “F**k white people” movement got more than 395,000 views.

He said he was used to the criticism that comes with putting his thoughts out in the open, but that the recent resurfacing of videos was a targeted attack by someone out to tarnish his image.

Last Thursday evening he sent a cease and desist letter to Thegandra Naidoo, the publisher of those videos, saying he would consider legal action if he did not get an apology by Friday July 31.

I've become a target with the woke left and their attempts to smear and discredit me. I have decided enough is enough and that it's time accountability is served. So make sure of your "facts" before you come for me. I won't spare a cent. I refuse to back down #TimesAreChanging pic.twitter.com/JyyrJhL4GV

Social media expert Sarah Britten said the question of one’s personal brand versus one’s employer brand had been a thorny one since the advent of social media.

“It doesn’t only apply to politics — it can make any job a challenge. Given how polarised our politics is right now and the prevalence of cancel culture, it’s wise for employers to have a clear policy on social media. I don’t think there’s a hard and fast rule — individuals and their employers (whether a political party or not) will work out their own dynamic.

“We have a constitution that makes it pretty clear what’s acceptable legally and what isn’t. If you value a quiet, uncontroversial life then you wouldn’t be in politics in the first place.”

Britten said she believes more debate was better than less, and more politicians sharing their views with the citizens to whom they should be accountable and interacting with them would be a good thing.

DA attorneys have written to the Eastern Cape co-operative governance and traditional affairs (Cogta) head to confirm he will not intervene in ...
Politics
1 year ago

But social media expert Mike Sharman said the age of the social media post should not be used as an excuse for what was in the post.

“It's the old adage: if your mother would blush if she saw your comments on the front page of a newspaper, then why would you post those comments on your social media?”

According to Sharman, politics around the world have become focused on populist narratives.

“Interestingly, the results of the last election saw a growth in the FF+ and the EFF, and a reduction [in votes] to the DA. The growth of these parties can be attributed to their politics capturing the [populist] narrative. An extreme example of this is in the [United] States, where the Democrats are all saying the same thing. But Trump plays into the populist narrative. At rallies he's rude and he speaks against the news media, who go against him, and he supports Fox News, who are pro his politics.

Everyone can have own brand - and as a result there is no longer a separation of duties in the field versus on social media.

“Closer to home we see Helen's [Zille, the DA federal council chair] rants. These create an 'us versus them' feeling, a result of her personal brand.

“With social media, everyone can have own brand — and as a result there is no longer a separation of duties in the field [on the job] versus on social media,” he said.

Sharman added politicians could also be caught up in this.

Speaking of the government's calls for South Africans to obey lockdown rules due to the spread of Covid-19, he said it could “come back to bite them” if they were seen on social media doing the same.

This was evident, he said, with visuals from outside late ANC stalwart and Rivonia trialist Andrew Mlangeni's house, showing way more than 50 people present and social distancing rules being ignored. A picture of the event was shared by transport minister Fikile Mbalula.

“If a politician makes a comment at a rally about funeral celebrations and how we must behave because of Covid, it can come back to bite them, as happened when Mbalula posted a photo of [Mlangeni's] funeral, but he took the post down.

“How can you expect constituents to follow your advice if you are not leading by example?”

He said because social media gave us a mirror into ourselves and created a way to look into the past actions and thoughts of an individual, it has exposed how petty politicians are.

“I've lost all semblance of respect for politicians when I see these types of tweets. It makes politicians look like children, especially when they chose to block individuals who oppose their thinking,” he said.

BREAKING NEWS: Minister Fikile Mbalula says there were only 10 when they received the body of Bab'uMlangeni. It has since been noted that the Minister can't count.#RIPAndrewMlangeni #ANCMustFall #AnimalFarm pic.twitter.com/gGr5JFZDFl

In his defence of the old videos, Gouws said: “I do regret using such colourful language but I suppose it was the sheer frustration of having to listen to Zuma and Malema singing the Kill the Boer song before it was banned by the courts. I know the ANC used to sing it at most of their rallies leading up to the elections.

“I have matured a lot since then, considering I was 25 years old at the time. And with age and becoming more mature, you realise that screaming and shouting and using colourful language achieves nothing,” he said.

Gouws said the videos had been cut to form a narrative.

“I still to this day disagree with BBBEE/EE and AA, and believe we can have policies that uplift and benefit people on their economic standing rather than the colour of their skin.”

He said he could not comment on the person who posted the videos “due to the fact that I have initiated legal proceedings against him after he shared a doctored video of me that was clearly manipulated and then made some outlandish and false comments about me to his followers that I consider slanderous and deeply problematic.”

DA appoints CEO who is 'passionate about freedom and diversity'

The DA has appointed Simon Dickinson as its new CEO, the party announced on Friday.
News
1 year ago

DA national spokesperson Solly Malatsi said the party had a social media policy that provided a guideline of acceptable conduct on social and digital media by their public representatives and members.

“The individual’s views on his personal forums are solely his [Gouws's], not the party’s. As a party that believes in robust accountability, we don’t believe in name-calling, derogatory remarks and insults to our opponents, as fierce as our differences with them may be.

“To date, there hasn’t been any referrals for investigations by our federal legal commission as yet against the individual’s conduct in terms of our social media policy.”

But Nelson Madela Bay Ward 7 councillor John Best said Gouws's videos have been discussed by the party, which gave him permission to continue in his private capacity.

Dave Hayselden, the Ward 3 councillor, said Gouws went above and beyond his duties.

“I think he says what he wants to say and it comes out funny sometimes, but I've worked with him campaigning and he always does his bit — if not more.”

But a senior member of the DA, who did not want to be named for fear of retribution, said Gouws' videos had been investigated by the party on several occasions after complaints from party members.

“I have no idea why he is so protected. He has broken every rule there is with his podcasts and YouTube channels, but because he seems to support the right people they don't do anything to him. That's what I have seen,” said the party member.

An urgent high court bid by the DA in Durban for an order directing that the 2020/2021 budget hearing be re-held, was struck from the roll on Thursday
Politics
1 year ago

The member said several other DA members had been disciplined for posting opinions on their personal social media accounts.

Malatsi did not answer questions relating to whether other members of the party had been investigated for their comments on social media.

Meanwhile, former motoring journalist Naidoo said he would not be apologising for posting the videos of Gouws, and welcomed a chance to have the matter heard in court.

He said he was proud of his work in taking down online racists and put Gouws in that category. He said Gouws would not take him to court because Gouws “feared what I know”.

Naidoo said he began targeting Gouws after the councillor brought up the fact that he lost his job as a motoring journalist in 2014 after a comment he made about a news story where a driver shot and killed a motorcyclist in a road-rage incident.

The comment was: “I don’t blame the guy that shot the motorcyclist. They are obnoxious and arrogant. I cannot wait for my day to come when I will open my door and a motorcyclist will fly off his bike and hopefully break his neck!”

He said it was ironic that Gouws would use the excuse of being young when the videos were taken because Naidoo was the same age when he made the comment about the motorist.