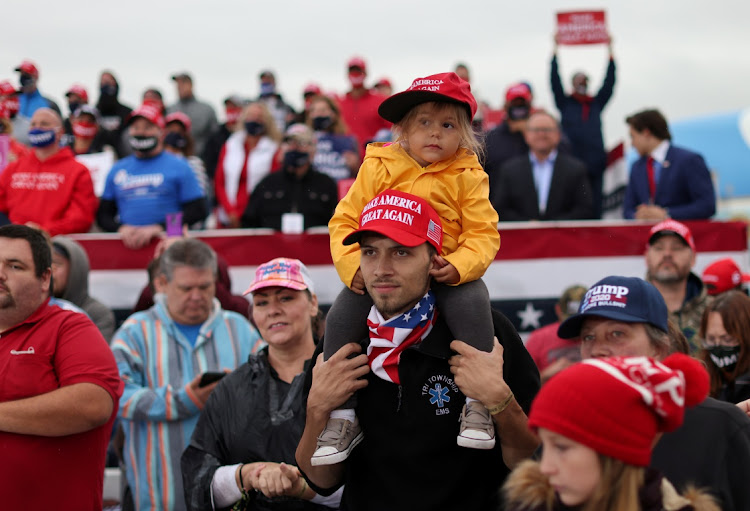 US President Donald Trump predicted at a rally in Michigan on Thursday that he would win the election battleground state as thousands of supporters cheered.

This is not the crowd of a person who comes in second place.

“This is not the crowd of a person who comes in second place,” Trump told men, women and children — many wearing red “Make America Great Again” T-shirts and hats — as he stood in front of the presidential aircraft Air Force One at an airport near Midland, Michigan.

Trump campaign officials say that in the run-up to the Nov. 3 election they are planning to spend “massive amounts” of time in Michigan, an industrial state that along with Wisconsin and Pennsylvania helped propel Trump to victory in 2016.

President Donald Trump and Democratic rival Joe Biden took swipes at each other on Monday as the presidential campaign entered its traditional ...
News
1 year ago

Trump campaign deputy national press secretary Samantha Zager said Trump was tapping into “organic enthusiasm from those who are disillusioned with career politicians like Joe Biden,” and would attract new voters to “expand an already broad coalition of support.”

Biden visited Michigan on Wednesday, hammering Trump over his taped comments to Washington Post writer Bob Woodward in which he said he was purposely downplaying the threat of the virus to avoid public panic.

Biden also unveiled an “offshoring tax penalty” on profits from products made overseas and sold in the United States, taking a page out of Trump's trade playbook.

The two politicians have widely divergent views on nearly everything, but both agree on the need to bring back manufacturing supply chains to the United States from China, and Biden is likely to keep many of Trump's tariffs in place initially if he were elected.

Whitmer's office had no immediate comment on the event, which appeared to violate state guidelines requiring social distancing and limiting large crowds. She told a news conference earlier Thursday she was concerned about plans for the rally, and would keep close tabs on infection rates in the region.

New York Times reporter Kathy Gray tweeted that she was escorted out the rally by Trump campaign workers after she tweeted photographs of the event.

A campaign source said a New York Times correspondent, who had not applied for credentials through the normal process, was asked to leave because she was not in the required press area. She was told she could stay in the general admission area but not while reporting, and she declined, the source said.

Greg Fernandez, 63, who works in real estate, said he was not wearing a mask at the rally because he had already had the virus, “so I'm good.”

Fernandez said he expected Trump to win Michigan handily, adding: “No more globalists, no more new world order. We need a businessman to run our country, and he's done a great job.” — Reuters