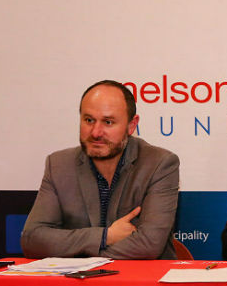 This follows several requests for the provincial government to intervene in the municipality, which has failed to elect a new mayor and is sitting with a R1.6bn hole in its budget.

The metro has been without a permanent mayor since the ousting of UDM councillor Mongameli Bobani on a no-confidence vote at a council meeting on December 5.

The National Treasury is withholding several grants from the city, including the equitable share, Urban Settlements Development Grant and skills development grant, as well as IPTS funds.

With Nelson Mandela Bay up for the taking at the 2021 local government elections, ActionSA leader Herman Mashaba is considering throwing the party’s ...
Politics
9 months ago

Odendaal  said In a letter to premier Oscar Mabuyane on Thursday last week that the provincial government had done nothing to intervene and stabilise the metro.

“It is my considered opinion that the administration has now even further regressed and its collapse is inevitable should you fail to intervene forthwith.

“The Bay council has made no attempt to elect an executive mayor, notwithstanding a directive from national co-operative governance and traditional affairs and a court order to this effect.

“The standoff between the National Treasury and the municipality has also seriously compromised the financial sustainability of the metro,” he said.

At a special council meeting on Friday, it was announced that the Bay’s acting city manager, Mandla George, would meet Treasury officials on Wednesday to plead for the release the much-needed funds — some of which subsidise the city’s more vulnerable residents.

The Treasury initially withheld the funds because the metro had failed to act on the recommendations of a forensic investigation into the IPTS about three years ago, which uncovered alleged large-scale corruption and how hundreds of millions of rand had been wasted.

The Treasury has also instructed the city to appoint a permanent mayor.

In July, co-operative governance MEC Xolile Nqatha threatened to dissolve the municipality in a letter to Bay acting mayor Thsonono Buyeye and gave the municipality an opportunity to motivate why the council should not be dissolved.

Buyeye took Nqatha to court, effectively telling him to butt out of the city’s affairs, but lost the case.