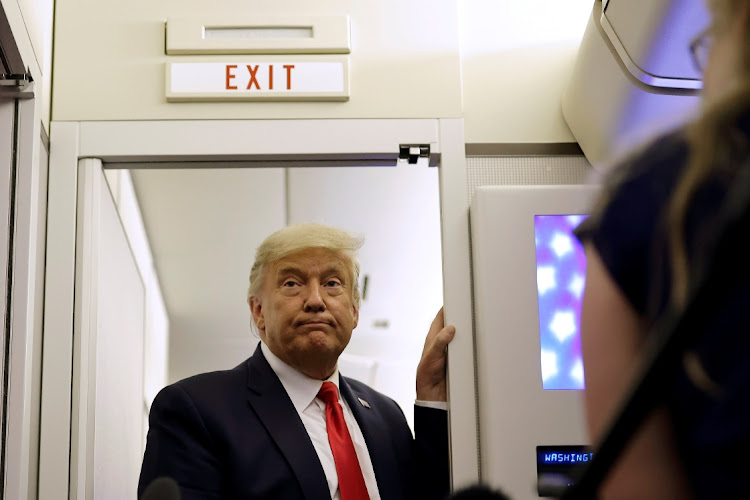 US President Donald Trump talks to journalists on board Air Force One en route to Washington DC after a campaign rally in Arizona, the US, on October 19 2020.
Image: REUTERS/ CARLOS BARRIA

US President Donald Trump headed to the battleground state of Pennsylvania on Tuesday, a day before former President Barack Obama visits the state to tout his former vice-president and Trump's Democratic rival in the November 3 election, Joe Biden.

Early voting opened in another competitive state, Wisconsin, on Tuesday, while more than 34-million early ballots have been cast nationwide two weeks before voting ends on election day.

National opinion polls show Biden holding a wide lead on Republican Trump, though the contest is closer in swing states that decide elections including Florida, North Carolina and Pennsylvania.

Trump has gained some ground on Biden in Pennsylvania, according to a Reuters/Ipsos poll released on Monday, which showed the challenger leading by 49% to 45%, slightly narrower than a week earlier.

Trump was due to hold a rally in Erie, in Pennsylvania's northwest corner while Biden had no events planned for Tuesday.

But underscoring the importance of the “Rust Belt” state, Obama was due to campaign for Biden at a “drive-in car rally” event on Wednesday in a Pennsylvania location yet to be announced. It will be Obama's first in-person campaign event for Biden, who served with him for eight years.

Trump's handling of the coronavirus pandemic, which has killed more than 220,000 people in the US and thrown millions out of work, has taken a toll on his re-election prospects.

Despite rising cases of the highly contagious disease, which landed Trump in hospital for three nights, he has resumed a heavy schedule of campaign travel including rallies where his supporters pack together tightly, many not wearing masks.

Trump's path to victory is narrowing in the state-by-state race that determines who will move into the White House on January 20, 2021.

Reuters/Ipsos polling shows Trump trailing in Wisconsin and Michigan, the two other Rust Belt states that he narrowly carried four years ago. Trump also trails in Arizona and the two are effectively tied in Florida and North Carolina.

More than 34-million votes have been cast, according to the University of Florida's US Elections Project, more than a fifth of the total vote in the last presidential contest four years ago.

The final debate between President Donald Trump and Democratic rival Joe Biden will feature a mute button to allow each candidate to speak ...
Politics
11 months ago

Early returns show registered Democrats outpacing Republicans in most states that track party affiliation. Trump has repeatedly characterised absentee voting as unreliable, though experts say it is as secure as any other method.

His campaign and the Republican Party have sought, with mixed success, to limit voting by mail-in states that expanded it in response to fears of spreading Covid-19 at crowded polling places.

In Pennsylvania, his campaign has failed to prevent officials from setting up ballot drop boxes, a popular option in many other states.

Wisconsin voters bundled up and braved low temperatures, to stand in line at over-subscribed polling locations in such cities as Milwaukee, where people waited about an hour, according to videos posted by media outlets.

“We're holding our breath, and I'm concerned about lines at early voting places,” said Jay Heck, executive director of the non-partisan voting rights group Common Cause in Wisconsin. “Voting does seem to be pretty robust. ... Every area — red counties and blue — there seems to be a lot of enthusiasm,” he said in a reference to counties that lean towards either of the parties.

US President Donald Trump and his Democratic challenger Joe Biden will court early voters as their campaigns step up events ahead of their final ...
News
11 months ago

Trump and Biden will face off in a final televised debate on Thursday, their second such matchup after Trump backed out of last week's planned appearance over a disagreement about the virtual format after his Covid-19 infection.

Organisers said on Monday a candidate's microphone would be muted to ensure his rival had a chance to speak for two minutes at the outset of every 15-minute debate segment — an attempt to head off the interruptions that marred the first encounter.

We're talking about things that are not foreign policy. And frankly, it was a change that they made that was far bigger than the mute button

Trump's campaign objected to the rule change but said he would participate.

On Tuesday, Trump repeated his complaint the debate will not focus on foreign policy, an area where his campaign believes he holds an advantage because of Biden's record in the Obama administration.

“We're talking about things that are not foreign policy. And frankly, it was a change that they made that was far bigger than the mute button,” he told Fox News.

The Biden campaign said Trump wants to centre the debate on foreign affairs to distract from discussing his handling of the coronavirus pandemic.