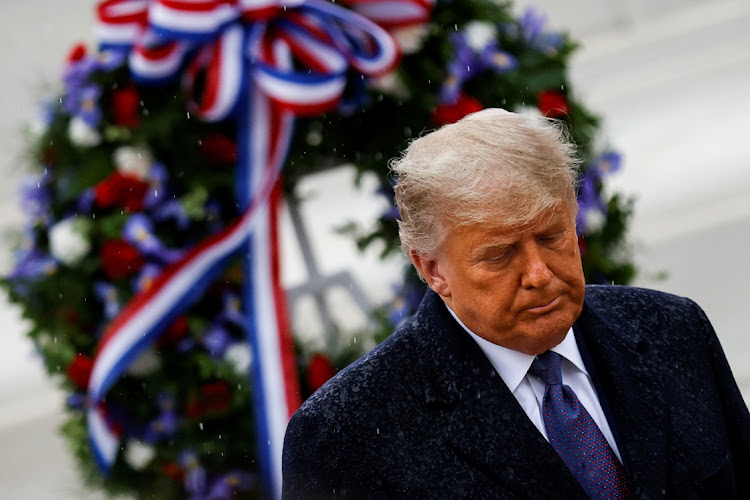 US President Donald Trump departs after placing a wreath at the Tomb of the Unknown Solider as he attends a Veterans Day observance at Arlington National Cemetery in Arlington, Virginia, the US, November 11 2020. Picture: REUTERS/CARLOS BARRIA

President Donald Trump's campaign filed a lawsuit in Michigan on Wednesday as part of its long-shot legal strategy to upend Joe Biden's November 3 election win, even as the former vice-president focused on laying the foundation of his incoming administration.

The Republican president's team went to federal court to try to block Michigan, a Midwestern battleground state that he won in 2016 but lost to the Democrat in media projections, from certifying the results. Trump trailed by roughly 148,000 votes, or 2.6 percentage points, in unofficial Michigan vote totals.

Trump has declined to concede the election to Biden, instead lodging a flurry of lawsuits in pivotal states to try to back up his unsupported claims of widespread voting fraud. The Michigan lawsuit also made allegations of misconduct in the voting, with the focus on the Democratic stronghold of Wayne County, which includes Detroit.

Jake Rollow, a spokesperson for the Michigan department of state, said the Trump campaign was promoting false claims to erode public confidence in Michigan's elections.

“It does not change the truth: Michigan's elections were conducted fairly, securely, transparently, and the results are an accurate reflection of the will of the people,” Rollow said in a statement.

Prominent Republican legislators and other Trump allies have backed the president's strategy, saying he has the right to contest the election results. The suit was filed one day after Biden called Trump's failure to concede an “embarrassment”.

Judges have tossed out several of the Trump lawsuits, and legal experts say the litigation has scant chance of changing the election outcome.

Biden last Saturday clinched victory in the election as he won a series of battleground states to exceed the 270 electoral votes needed in the state-by-state Electoral College. Biden was winning the national popular vote by at least 5-million votes, with some states still counting ballots.

President-elect Joe Biden plans further meetings on Wednesday to lay the groundwork for his new administration while President Donald Trump pursues a ...
News
1 year ago

Biden and his wife Jill visited a war memorial in Philadelphia to mark Veterans Day on Wednesday before returning home to Delaware.

Trump placed a memorial wreath at the Tomb of the Unknown Soldier in Arlington National Cemetery in Virginia, outside Washington. It was his first public appearance, other than two golf outings, since a White House news conference last Thursday in which he made unsubstantiated election fraud claims.

While Trump made no remarks at the cemetery, in Twitter posts on Wednesday he kept up his narrative of voter fraud, referring to “a mountain of corruption & dishonesty” while also assailing pollsters.

Biden has a narrower lead in Georgia, another state Trump won in 2016, with the result heading to a recount. The Trump campaign also released what it described as evidence of a handful of dead people casting illegal votes in Georgia.

Georgia secretary of state Brad Raffensperger told a news conference that the state would conduct a hand recount of all ballots, which was expected to begin this week. He said the results would be certified by a November 20 deadline.

As election misinformation continued to rage online, Facebook said on Wednesday its post-election ban on political ads would likely last another month, raising concerns from campaigns and groups eager to reach voters for two runoff races in Georgia in January that could determine whether Republicans maintain control of the US Senate.

Nearly 80% of Americans, including half of Republicans, say Biden won the election, according to a Reuters/Ipsos poll released on Tuesday.

Trump's refusal to accept defeat, even as many world leaders congratulate Biden and look to their future relations with the US, caps a volatile nearly four years in office with the nation deeply polarised and facing a sharp resurgence in coronavirus cases. During the campaign, Trump had refused to commit to a peaceful transfer of power.

Trump, who has attracted support among a dedicated base of supporters with his right-wing populism, has delighted his admirers with his combative style and the shattering of norms. He has eschewed a public concession or the pledge of co-operation typically offered by outgoing presidents. Biden is due to be sworn in on January 20.

'Did those African angels ever show up?': Twitter mocks prayer for Trump to win US elections

Paula White, spiritual adviser of outgoing US president Donald Trump, and "African angels" are trending on social media after Trump lost the US ...
News
1 year ago

The Trump administration is not co-operating with Biden's team, which has been unable to move into federal government office space or tap funds to hire staff.

Biden plans to meet advisers on Wednesday who are helping him prepare to take office.

He has tapped finance, trade and banking regulation experts for his transition team who range from mainstream Democrats to progressive activists, reflecting ongoing debate within his party about how to address climate change, wealth inequality and other issues.

The outcome in a small number of states remained undecided with Trump holding a lead in North Carolina and Biden ahead in Arizona in addition to Georgia. Recounts are unlikely to change the outcomes.

To remain in office, Trump would need to win all three undecided states plus overturn the results in one or more states in Biden's column, a highly unlikely prospect.