Tea with Zuma: a timeline of events that have had SA talking 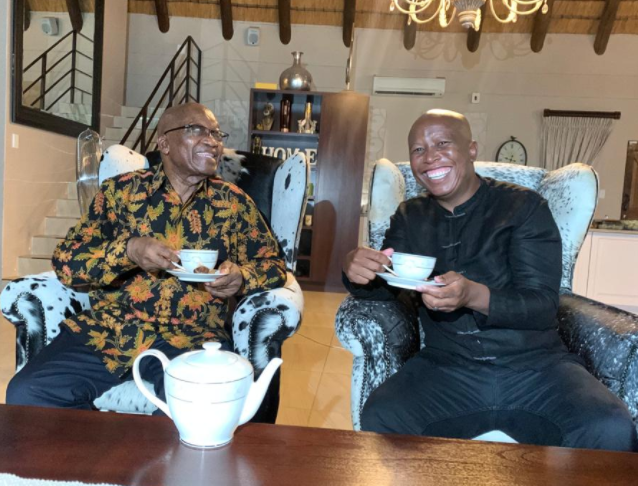 Neither EFF leader Julius Malema nor former president Jacob Zuma has disclosed the agenda of the meeting that held the attention of South Africans since Wednesday last week.

Malema tweeted Zuma and asked to urgently meet him over tea. The meeting request came after the former president’s refusal to appear at the state capture inquiry due to his “relationship” with deputy chief justice Raymond Zondo, the chairperson of the inquiry.

Two weeks ago the Constitutional Court ruled that should Zuma fail to appear and testify before the inquiry on February 15 without any sound cause, he would be in breach of the commission’s act and the ruling by the apex court.

Speculation brewed about whether Malema sought to convince Zuma to reconsider his stance on the inquiry.

Last year Zuma called for Zondo to recuse himself as inquiry chairperson after he accused the judge of bias.

People calling for former president Jacob Zuma to be sacked from the ANC after his refusal to appear before the state capture commission are ...
News
1 year ago

Malema told Newzroom Afrika that Zondo should not be recused from the inquiry, and said instead Zuma must face accountability for his alleged involvement in state capture.

“That is the man who must be chained. That one we must go fetch from Nkandla and he must come and answer here. Zuma engages in extremely stupid things and doesn’t want to be held accountable,” he said.

Here’s the rundown of the meeting:

February 3: Malema reaches out to Zuma

EFF spokesperson Vuyani Pambo told TimesLIVE the meeting between the two was a matter of national importance. South Africans were left with more questions than answers last Wednesday after Malema reached out to Zuma via Twitter and asked him for “an urgent meeting”.

Zuma responded promptly and told the firebrand leader he was more than happy to host him at his Nkandla home in KwaZulu-Natal.

Ekurhuleni mayor Mzwandile Masina was the middle man who facilitated the meeting between the political rivals. He said Malema and Zuma “contributed to the constitutional being of SA” and would provide their insight on SA’s democracy.

Who foots the bill for the "Nkandla tea party"?
Politics
1 year ago

Pambo would not be drawn to “spill the tea” on what the meeting was about. Some had speculated that Malema would try to convince Zuma to appear and testify at the state capture inquiry.

Asked about this, Pambo said he could not speak for the former president.

February 5: Malema hits back at critics

Among the critics of Malema and Zuma’s meeting was Wits University vice-chancellor Prof Adam Habib.

Malema refused to accept the comparison and hit back at Habib, saying the pact happened when President Cyril Ramaphosa became Zuma’s deputy in 2017. He said Habib had “conveniently” forgotten this because it doesn’t suit his narrative.

Malema also dismissed ANC veteran  Darek Hanekom after he criticised Zuma for agreeing to the meeting.

“What a joke! The man who called me an enemy agent for having coffee with [former EFF secretary-general] Godrich Gardee now invites the president of the EFF to his home for tea.”

Malema told Hanekom the meeting was between black people.

Zuma needs a new home where the tea is sweet. Enter Malema

Could Jacob and Julius be making plans to unleash the Pac-Man Method on South African politics?
News
1 year ago

The Sunday Times reported that sources who spoke to the publication on condition of anonymity said the meeting was not as spontaneous as it was portrayed to be on Twitter. They said it had long been in the works.

They also claimed the meeting was pursued by ANC members who are pro-Zuma and anti-Ramaphosa’s leadership.

The sources said among issues discussed in the meeting was Zuma’s defiance of the ConCourt order. The former president was advised to reconsider his stance as he could face serious legal implications. A source told the Sunday Times the former president stuck to his guns and said he will not go to the inquiry.