WATCH | Youth League responds to 'ANC marching against itself' backlash 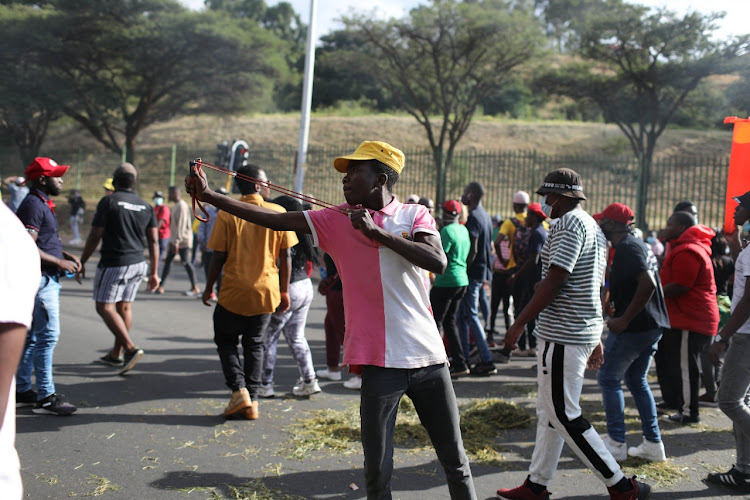 Protesting students on Monday retaliated against the police after water cannons were used to disperse them.
Image: Alaister Russell

ANC Youth League (ANCYL) activist Lindokuhle Xulu has slammed those questioning whether the ANC is marching against itself amid countrywide student protests.

“That is a worrying question and it is opportunistically used by people who want to silence the youth league and render it irrelevant. The ANCYL is the lobby group within the ANC, it is the wing of the ANC,” he told Newzroom Afrika on Monday.

The broadcaster reported that Xulu joined students who marched to the offices of the National Student Financial Aid Scheme (NSFAS) in Cape Town to demand that it address issues related to a lack of funding for the 2021 academic year.

[LISTEN] Is the ANC marching against the ANC?

ANC secretary-general Ace Magashule joined Wits University students on Thursday during their march to Luthuli House, where he received their memorandum of demands.

He assured them of the ANC's commitment to ensuring free higher education for all.

This was not well received on social media as many slammed the ruling party for “marching against itself”.

EFF deputy president Floyd Shivambu tweeted: “So ANC aligned students from Wits marched to the ANC head office to demand free education and its secretary-general led them in a march to the Constitutional Court? To do what there?”

The SA Union of Students (Saus) on Monday continued with the national shutdown of universities to force higher education minister Blade Nzimande to clear all historical debt owed by students and allow them to register. The union said the demonstration would continue until all their demands are met.

The ANC national executive committee (NEC) has requested provincial structures to submit a list of two names who will represent the ANC Youth League ...
News
1 month ago
Next Article