Party's secretary-general will receive his full salary of about R130,000 a month, plus benefits, while on suspension 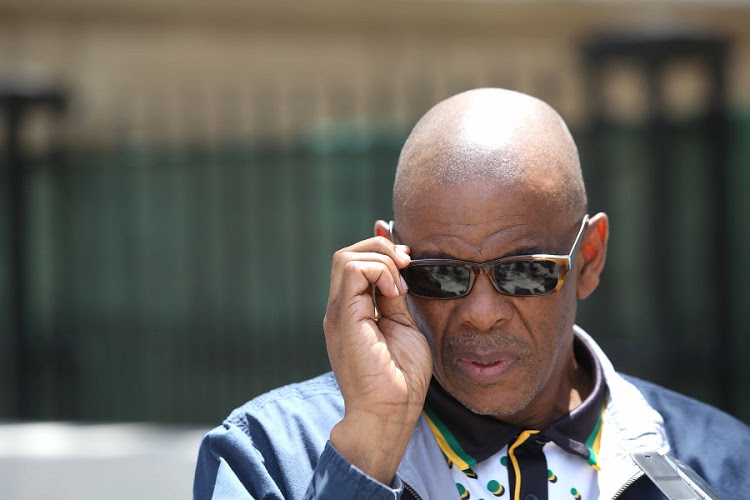 ANC secretary-general Ace Magashule has been suspended from the party.
Image: Esa Alexander

ANC strongman Ace Magashule will no longer be allowed to publicly speak on behalf of the party, or lobby anyone on its behalf.

This comes after it emerged on Wednesday that Magashule was served with a letter of suspension on Monday, the same day the ANC's national working committee resolved that party leaders who failed to step aside voluntarily be summarily suspended.

Magashule's suspension letter was signed off by his deputy, Jessie Duarte, who was communicating the decision of the NWC.

In her letter to Magashule, Duarte informed him that he had failed to comply with a party resolution that ANC members facing formal criminal charges should voluntarily step aside by the end of April, as per the decision the ANC national executive committee at the end of March.

Magashule is facing a raft of charges including corruption, fraud and racketeering related to a R250m asbestos eradication tender that was awarded in the Free State during his time as the premier. He is a co-accused in a long list of accused people including businessman Edwin Sodi who won the tender with his now-deceased partner Ignatius Igo Mpambane.

Magashule refuses to voluntarily step aside
News
1 month ago

In her letter, Duarte told Magashule that the party’s NWC, which met on Monday, authorised her to suspend him until his court case has been concluded. She explained that the NWC resolved that it was in the best interests of the ANC that all members facing charges be served with suspension letters.

“Accordingly, on the authority of NWC, you are hereby temporarily suspended with effect from May 3 2021, until the final outcome of your court proceedings,” Duarte wrote to Magashule.

However, the decision to suspended the man in charge of the day to day running of the governing party is expected to spark fierce debate at this weekend’s NEC meeting, starting on Saturday. Magashule’s backers are expected to mount a push back at the meeting.

However, Magashule's suspension was expected to be endorsed by the NEC as those supporting his rival, President Cyril Ramaphosa, were in the majority within the highest decision making body in between conferences.

Duarte told Magashule he was not expected to perform any of his functions as secretary-general during his suspension.

Magashule is barred from publicly representing the ANC and also barred from speaking on any matter involving the party. He may not mobilise any structure of the ANC or any organisation or any person on any ANC matters, especially on the issue of his stepping aside.

Magashule will, however, still receive his salary and all the other benefits that come with his employment. He earns around R130,000 a month.

Duarte told Magashule that the NWC decided that he, and other affected members, must update the office of the secretary-general monthly around developments on his case.

“The decision to temporarily suspend you will be reviewed by the NEC every six months, or from time to time at your request,” Duarte said.

TimesLIVE reported this week that the treasurer-general of the ANC, Paul Mashatile, is running against the clock to formulate the appeal processes on the party’s step-aside resolution.

It is expected that several criminally charged ANC members, including Magashule, affected by the party’s step-aside resolution will not vacate their positions voluntarily and would go the appeal route.