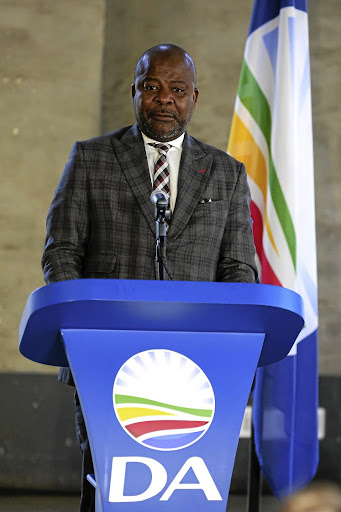 Nelson Mandela Bay mayor Nqaba Bhanga is expected to make a statement about a fatal road accident in Gqeberha of which he is the only survivor.
Image: Supplied

DA leader John Steenhuisen has come out in support of Nelson Mandela Bay mayor Nqaba Bhanga, just a few hours before Bhanga was supposed to make a statement on the circumstances around a fatal car accident he was involved in.

Speaking to TimesLIVE on the sidelines of the launch of the DA Tshwane mayoral candidate campaign launch, Steenhuisen said he had spoken to Bhanga and accepted his explanation.

Bhanga is facing a police probe for a possible case of culpable homicide and breaking curfew after he got into an accident that killed two people, Sandile Ronald Sicolo and Nonzwakazi Maho, who were travelling in an Audi in Gqeberha late last month.

Initial reports said Bhanga had earlier been celebrating his birthday, leading to disappointment from some opposition parties that police had failed to take his blood sample to test for alcohol levels on the scene.

But Steenhuisen dismissed criticism over the handling of the case.

“He will be making a full public statement in the next 24 hours about the accident and what the circumstances were. I have sat down with him, he has explained to me what they [the circumstances] were. According to my understanding of the lockdown regulations, they were legitimate and I am sure that people will find out why he was out after curfew and I certainly think that it was a legitimate reason,” said Steenhuisen.

He confirmed that Bhanga would not be resigning as DA mayoral candidate.

“I think that once people get a full picture of what happened that evening, there will be a clearer picture [and] people will be able to see and make up their own minds,” said Steenhuisen.

Steenhuisen: A legitimate reason for Bhanga to be out after curfew

The reason Nelson Mandela Bay mayor Nqaba Bhanga was out so late on the night of a fatal accident is “legitimate in terms of the Covid-19 ...
Politics
5 days ago

Referring to allegations of a police cover-up over the blood test for alcohol, Steenhuisen said a number of people had been coming up with conspiracy theories but there had not been any concrete evidence coming out.

After the incident, the DA had embarked on its own internal investigation on what had happened.

The party takes the NMB, which it now leads through a coalition government, as one of its serious targets in the upcoming local government elections and wants to retain it or even win it outright.

“The evidence that I have seen has satisfied me that where the mayor was, where he had come from, why he was out and where he was going and I think that when people understand it, I am sure they will be sympathetic to those reasons as well,” said Steenhuisen.

He said the people of NMB had seen the work Bhanga had done during his time as mayor of the city and had a choice to make on whether they give back the municipality to the ANC or they want to give it back to the DA.

Bhanga is said to have told his caucus, during a virtual meeting on Sunday, that he was not at fault in the accident.

The Herald reported on Monday that Bhanga told the caucus that if he had caused the accident he would not have addressed them.